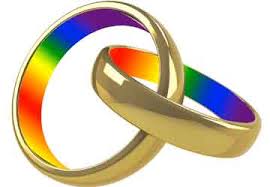 How should we Catholics react to the presence of anyone involved in a same-sex marriage in any role of ministry in our church congregation?  Sean O’Conaill presents a very personal view.

Activist ‘forced’ lesbian couple to leave roles in church choir. So reported Patsy McGarry in the Irish Times on September 9th 2016. Less than five hours later, this headline had been replaced with Lesbian couple to retake church roles they were ‘forced’ to leave.

As such brief reports typically summarise and over-simplify a great deal of complexity, and I have no means of verifying the factual statements made in that report, I will refrain from attributing any of the reported ‘facts’ to any named individual. My purpose here is not factual reportage but personal reflection and comment upon a situation which we can regard as entirely hypothetical, as follows:

Person A, described as an ‘activist’, takes exception to the participation in a Catholic church choir, and in Eucharistic ministry, of Persons B and C – on the grounds that their gay civil marriage is contrary to Catholic teaching. Person A makes known this opposition in such a way that Persons B and C at first feel obliged to relinquish their membership of the choir. Sometime later they reverse this decision – influenced, it appears, by an unknown number of other members of the same church community who do not share Person A’s position.

The story is of interest to Catholics generally for the obvious reason that this situation could occur anywhere, posing (possibly) a clear challenge. We will all naturally ask ourselves ‘how would / will I respond in that same situation?’

Asking myself that same question, I place myself in the situation firstly of Person A, who becomes aware of the personal relationship of Persons B and C and their membership of the church choir in my own local church. What, if anything, do I feel compelled to do about this circumstance?

Yes, Persons B and C do appear to be in breach of a disciplinary position advised to us by the official leadership of the church – but is it not possible, even likely, that other members of the same congregation (and perhaps even I myself) are in breach of one or more other rules of the church, and that these other infractions could well be known to others present? As it is most unusual for anyone to take express exception to the presence of someone else in a church gathering, for whatever reason – even if that person is in some kind of ‘leadership’ role  – is this particular circumstance exceptional to a degree that obliges me to behave in an exceptional way?

On balance I strongly think not. For one thing, the official leadership of my church in Ireland has signally failed even to try to convince me that it has understood human sexuality as fully as this particular situation requires. No one yet has convinced me that the church’s ‘take’ on ‘natural law’ requirements regarding sexuality and marriage is binding in conscience – and none has ever entered into dialogue with me or anyone I know on the matter. (At 73, I have been a Mass-goer in Ireland all of my life.)

Furthermore, when it came to church management of other issues of sexual morality in the church – specifically clerical sexual abuse of children – huge injustices followed that have not yet been fully explained or healed. Had the principles of natural justice been followed in those circumstances, rather than the comparatively trivial matter of protecting popular trust in priestly celibacy, thousands of Catholic families throughout the Catholic world would have been saved from long-lasting trauma.

So the central question for me now in regard to all issues of sexual relationships is: ‘what are the requirements of justice here?’ Until the Catholic episcopal magisterium has also systematically addressed issues of sexuality and marriage under that criterion I will remain unconvinced by ‘natural law’ argumentation on matters of sex. (Instead, a US Catholic theologian who has systematically pursued that very line of inquiry has been censured – without any discussion, as usual – by the Holy See. That is in no way convincing either. * )

And knowing that the same bishops allowed priests guilty of clerical child abuse to continue to celebrate the Eucharist – without ever warning even the parents of those children who served on the altar – on what grounds would I feel compelled to complain about the presence of anyone in a same-sex marriage in the choir or in the role of a Eucharistic minister? How, in justice, could I do that? The question answers itself.

So, next, how would I react if someone else in my church community took such an action, leading to a decision by others to resign from any ministry open to lay people?

I honestly hope I would have reacted as others appear to have done in the case cited above: taken the trouble, firstly, to express disagreement with the action of Person A, and, secondly, to show solidarity with Persons B and C – for the reasons given above. I hope I would also take the opportunity to protest the total lack of opportunity to discuss such issues with clergy during the whole of my adult life – and to point out that this clear moratorium on dialogue has done untold damage to the faith and trust of so many families in Ireland, as well as to confidence in the said magisterium. For me, no ‘New Evangelisation’ can be effective in Ireland until that truly disastrous dialogical deficit is remedied.

Finally, I hope I would also take the trouble to oppose any move to ostracise or pressurise Person A into leaving my church community either, and to make known that opposition to Person A. When it comes to celebrating our central Eucharistic and penitential rite, all of us deeply need to embrace fully the principles of both mercy and inclusion – and to seize such ‘learning moments’ as a God-sent opportunity to begin the deep discussion that has been so disastrously delayed for so long. Person A also needs a hearing, and compassion – and this Year of Mercy surely requires of all of us a supreme effort to bear with one another as imperfect beings who are called, above all, to love.