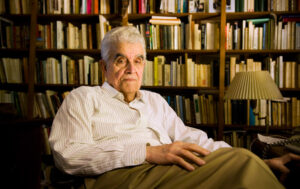 Not for nothing has René Girard been described as ‘the Darwin of the Social Sciences’. His key ideas have proved influential in academic disciplines as varied as Literary Criticism, Anthropology, Theology, Philosophy, History, Economics, Politics, Psychology, Psychiatry, Psychotherapy and the study of International Relations.

Born in Avignon, France in 1923, Girard studied medieval history in Paris – but then left for Indiana, USA to gain a PhD in French literature.  An experience of cancer led to the recovery of his Catholic faith, and to an insight into a central theme of classic novels such as Don Quixote, Madame Bovary, The Scarlet and the Black : our deepest desires tend to originate in unconscious imitation of someone else.
Calling this phenomenon ‘mimetic desire’ he became convinced that the European secular ‘Enlightenment’ of the seventeenth and eighteenth centuries had been mistaken in seeing humans as heroically choosing their own desires and destinies, and in underestimating the influence of our human context in determining the direction of our lives.
That conclusion led him naturally into philosophy and anthropology – and a fascination with the Judeo-Christian scriptures. Seeing the thrice-repeated warning about ‘covetousness’ in the Decalogue as none other than a warning about mimetic desire, he saw this problem repeatedly illustrated in biblical stories such as that of Joseph and his brothers, and King Solomon’s judgement of the two women who claimed the same child.  Arguing that mimetic desire was the key to understanding all conflict, he came to see it as the source of violent creation myths in all cultures – and of the universal archaic practice of blood sacrifice.
Arguing that this practice originated in the all-against-one practice of scapegoating or ‘lynching’ to defuse a social crisis, Girard at first opposed the belief that the greatest instance of this practice – the Gospel account of Jesus’ persecution and execution – could properly be described as a ‘sacrifice’. He was later led by the Austrian theologian Raymund Schwager to the conclusion that the idea of sacrifice is itself undergoing an evolution in the scriptures.  Always also an intended gift to God, sacrifice had become, through Jesus, an act opposed to violence – an act of self-giving.  ‘Priesthood’ too had thereby been transformed: the priest was no longer deflecting the violence of the community onto a separate innocent victim but making himself the bearer of that ‘sin’.
As this made Girard a philosophical defender of the uniqueness and objective truth of Judeo-Christian revelation – as well as an observant Catholic – it made him also a target of ‘relativist’ academics.  The latter reject all ‘meta-narratives’ [‘super-stories’] which claim a supreme authority on the meaning and direction of human history.  So he remains deeply controversial, as well as inspirational to many scholars of the different crises and controversies of secular thought.

Does that make him a ‘liberal’ or a ‘conservative’ in Catholic church controversies?  Far more important, it makes his work a potential bridge between those two poles.  Facing secular relativism squarely in defence of the Creeds, he nevertheless defies any comfortable acquiescence in Christendom, the long alliance between church and state that was undermined by the Enlightenment.  Monopolising as it does the use of force, the state can itself easily become enmeshed in mimetic conflict – most dangerously evident in the ongoing nuclear arms race.

Seeing in Girard’s insights an especially potent ‘explainer’ of major current world problems, Sean O’Conaill and Aidan Hart of ACI have written a series of articles for this website.  They remain convinced that the church at all levels needs to wake up to Girardian mimetic theory as a fertile source of Catholic intellectual recovery.  This page will point to these articles as they continue to appear, and to the work of other writers ‘sparked’ by Girard.

The Importance of René Girard : I – Mimetic Desire

Sean O’Conaill’s early consumerist fantasy – explained by the work of René Girard, profound Catholic theoretician on the origins of culture and the genesis of violence.

The Importance of René Girard: II – Jesus and Violence

We must not believe that Jesus intended violence – but that he has obliged us to choose forgiveness and repentance to achieve peace.

Why do we so often begin to want what seems to give happiness and status to others – even at Christmas time? Sean O’Conaill here attempts an explanation of ‘mimetic desire’ by recounting personal experience and by drawing on the insights of Alain deBotton and Charles Dickens.

Mimetic Desire, The American Dream And the Next Global Financial Crisis

By applying René Girard’s theory of mimetic desire to the American Dream and national economies, Aidan Hart shows how it reveals their deep sickness and inevitable journey towards increasing violence, environmental decay and the disintegration of the social, moral and religious fabric of society. As our world lurches from crisis to crisis, has Christianity the answer?

Catholic Education and the Future: Insights from René Girard

As new media-driven cultural forces erode the faith-forming effectiveness of traditional models of Catholic Education, Sean O’Conaill and Eugene McElhinney (former colleagues in the same Irish Catholic second-level school) are optimistic about the long term prospect of a turn-around – based on Girard’s key insights into the driving force behind all culture.

New Light on the Problem of Atonement

René Girard’s insights into the origins of violence and over-consumption help to explain how the Crucifixion reconciles us humans to God.

The Mass: a ‘Holy Sacrifice’?

In what sense is the Mass a ‘Holy Sacrifice’? Does God want violence? Can we instead understand ‘sacrifice’ as redefined by the Cross? Introduction to an important recent article by Anthony R. Lusvardi S.J.

The Colloquium on Violence and Religion

This link will take you to the website of the most important academic community devoted to Girard’s work.  It will give a vivid impression of the scale and scope of his ongoing influence – and you can join if you wish!

Sean O’Conaill became hooked first on Girard’s insights when he read Gil Bailie’s Violence Unveiled (NY, Crossroad) 1995.  However, he now believes the best account of Girard’s theory and how it relates to the western philosophical tradition is René Girard’s Mimetic Theory by Wolfgang Palaver (Michigan State University Press) 2013. It’s expensive for a paperback, unfortunately, so a good compromise might be Discovering Girard by Michael Kirwan (Darton, Longman and Todd) 2004 – at less than half the price of Palaver’s book.

In 2018 Cynthia Haven’s intellectual biography of Girard appeared: Evolution of Desire: A Life of René Girard. It was named by the San Francisco Chronicle as one of the top books of 2018

These websites are also dedicated to the ideas of Girard and his collaborators: