René Girard’s insight into the desires that drive us is currently revolutionising the human sciences – but why do we tend unconsciously to adopt the desires of others? Here Sean O’Conaill attempts an answer.

What underlies ‘mimetic’ desire – the desire that we unconsciously copy from someone else, and make our own?  This question was posed by myself to Duncan Morrow in a conference centred on the thought of René Girard in Corrymeela, Northern Ireland, in November 2017.

Necessarily confined by his need to deal also with other questions in a short time-frame in this seminar situation, Duncan’s response was concise in my memory of it. Arguing against the romantic Enlightenment conception of the individual person as a completely autonomous actor, he emphasised the necessarily relational development of the ‘self’. Referencing the French philosopher Emmanuel Levinas, Duncan proposed (I believe) that the desiring ‘self’ is always participating and developing within a network of relationships in both time and space. He drew a simple lattice of intersecting lines to illustrate this. He then circled some of the nodes of this lattice as points of encounter with others that will necessarily impact upon us, and therefore upon what we will desire. (Figure 1)

Figure 1 – The lattice of social interaction

This was helpful to me, as I had already reached an understanding of mimetic desire as ‘socially mediated’.  However, I was struck by what seemed the ‘coolness’ or ‘lack of drama’ in this brief account of social interaction. I felt that I was being invited to believe that in these encounters there could be no question about the equality of dignity of the actors – that such events would always be as ‘comfortable’ as a conversation in Corrymeela.

Looking back I think this impression must have been partly a product of the two-dimensional illustration of that lattice. I wanted to go on to explore another interior dimension, that element of ‘drama’ – of ‘felt inadequacy and inequality’ – that is present in so many of our social interactions. I could not do that right then as other members of the group had other questions waiting.

And so I propose to explore it now, by introducing what I tend to call the universe of uncertainty, honour and shame in which we all emotionally dwell. I will begin with a very short story of my own early mimetic desire.

Some years before my own arrival on this planet in 1943, as the son of a Dublin civil servant, my mother’s younger sister had taken the eye of a prominent Dublin obstetrician. I grew up some miles away from a slightly younger cousin, the son of this doctor. Occasionally I visited his home in a far more select Dublin neighbourhood.

To this day my use of a particular brand of soap was determined by my finding it, on one of those days, in the far more luxurious bathroom of that house. Its shape and colour and weight and scent lingered with me, at the age of about twelve I think, and gave birth to the desire that I was later able to satisfy.

‘We are afflicted with a congenital uncertainty as to our own value.’ So concluded the philosopher Alain de Botton in 20041. I can think of no better short summary of my own considered view of our deepest human problem. As this chronic uncertainty tends to put us in flight from shame and in search of honour (both socially ‘mediated’) it lends itself to a perception of society as necessarily and righteously ‘judgmental’ – as having both the power and authority to determine our ‘worthiness’.

In that household of my cousin I had an acute sensitivity to my own social inequality, my lack of what is called ‘status’. I was not thinking in those terms at that time, but I was lacking in something important: this was painfully obvious to me. That I might make up at least part of the deficit by using that particular commodity seemed logical enough. No dramatic reverse had ever happened to me in that house – merely a condescension that was usually kindly. However, just that element of condescension, and my mother’s deferential yet slightly resentful behaviour towards my aunt and uncle, had been more than enough to make me want to ease the shame of my felt inferiority by that means.

A far more dramatic story— also to do with a visit to a grander house – is told in Dickens’s Great Expectations (1861). Raised in a smithy by a tyrannical sister and her submissive husband Joe Gargery, the young Pip – just beginning his apprenticeship in the smithy – is brought one day to the decaying but still impressive Satis House, to play with the ward of the very strange Miss Havisham.

This well-dressed young lady, the ‘very pretty’ Estella, disdains to play cards with Pip at Miss Havisham’s request – although she is of the same age. She comments on his ‘coarse hands’ and ‘thick boots’. Later she leaves him alone in a courtyard in the dismal Satis House, and Pip recalls:

I took the opportunity of being alone in the courtyard to look at my coarse hands and my common boots. My opinion of those accessories was not favourable. They had never troubled me before, but they troubled me now, as vulgar appendages. I determined to ask Joe why he had ever taught me to call those picture-cards Jacks, which ought to be called knaves. I wished Joe had been rather more genteelly brought up, and then I should have been so too.

When Estella returns to give him some food in that yard, without looking at him ‘as if I were a dog in disgrace’, Pip feels deep humiliation:

My sister’s bringing up had made me sensitive. In the little world in which children have their existence whosoever brings them up, there is nothing so finely perceived and so finely felt as injustice.2

Discerning on many subsequent similar visits to Satis House that the increasingly beautiful Estella is deliberately being schooled by Miss Havisham to attract and reject many suitors, Pip comes to desire not only Estella but the gentrified status that could allow him to court her. The novel pivots on that desire. Pip has become entrapped not only in the web spun by Miss Havisham but in the wider social web that had captured and unbalanced her.

Earlier, in Little Dorrit (1855), Dickens had made even more plain his understanding of this social conditioning. Briefly, the elderly William Dorrit has been locked up in the Marshalsea prison for so long, for debt, that he has become – at least hopefully in his own eyes – a worthy object of veneration. He deals with the shame of his indebtedness by affecting the role of monarch of the prison. He affects also the belief that visitors to the prison will feel privileged to pay tribute in small gifts of money for his upkeep. He converses with these as though bestowing honour upon respectful envoys from foreign lands.

His daughter Amy – Little Dorrit – had been born in and has grown up in the Marshalsea – and is stunned when an investigation reveals that, to a vast fortune trapped in legal confusion in the world outside, her own father, William Dorrit, is the true heir. Released from the Marshalsea in splendour, the family undertakes a European Grand Tour.

In Venice eventually, staying in a luxurious rented villa, Amy is troubled to observe that:

A perfect fury for making acquaintances on whom to impress their riches and importance has seized the House of Dorrit… It appeared on the whole, to Little Dorrit herself, that this same society in which they now lived greatly resembled a superior sort of Marshalsea.3

In just these two sentences Dickens reveals that William Dorrit’s real prison had not been the Marshalsea, or even London. He had carried it with him to Venice in his own head. It was the prison of his own fixed conviction that his dignity and value were absolutely at the mercy of the judgement of others, of society. His suddenly acquired wealth could not in itself convince him of his own dignity: it needed to be observed, appreciated, recorded – at the summit of that Victorian social pyramid – for Dorrit himself to be convinced of his own value as a person.

It seems to me therefore that to illustrate the perceived judgemental authority of that social network, in time and space – the network that convinces us that honour is not a ‘given’, and that shame attaches to the nakedness of owning nothing – we need to add something to that lattice in Figure 1. That ‘something’ should convey this perception by our ‘little selves’ that ‘society’ regards us not with affection or even disinterest, but appraisingly and with imminent scorn. 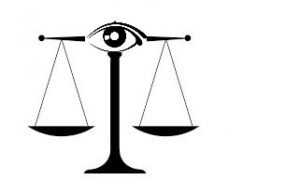 To try to convey this I did some searching among the images provided on the Internet for ‘scales of justice’ and ‘observing eye’ – and overlapped two of them, as follows (Figure 2):

What if we now zoom in on one of those ‘nodes’ of encounter in the experiential lattice in Figure 1 – to note that in critical social situations we are subjectively ‘under judgement’ as illustrated above?

It remains only to superimpose the second image upon the first to complete a rendering of the power of the social network to influence our mimeticism. (Figure 3)

From early experience of parental presentation to relatives (to warble agonisingly in an unreliable soprano in my case!) to the teacher’s assessment of our intellect in the classroom, to that first job interview and, in later years, to the end-of-year honours’ list, are our lives not always a series of ‘trials’? Always uncertain of the outcomes, is it not our fate to be poised always somewhere between the City of Shame and the City of Honour? And do we not typically seek to acquire whatever will ward off the disaster of social contempt – unless we can sometime find a means of ‘relativising’ society itself?

Somewhere in my encounters with Girardian literature I am sure I came across a quote from René that explicitly acknowledged that role of the fear of shame – in not only determining the object and intensity of our desire, but in explaining our reluctance to acknowledge that imitation has played a part in that. To my annoyance I cannot now locate that passage. I shall be indebted if anyone can help – and even more pleased with other references to this underlying dimension of honour and shame in choosing our models for us – and in determining the intensity of our desires – in the development of mimetic theory.

I strongly suspect that it is this same experiential dimension of judgement, honour and shame that for so long concealed the full meaning of the verb ‘to covet’ from Christian clergy – and that underlies much of the remaining resistance to mimetic theory in our own time. That a major ‘sin’ could have become obscured to the view of Christian moral theologians for so many centuries – to be uncovered by a lay student of secular literature in the late 1950s – is not something that those schooled entirely in theology and related religious disciplines would necessarily feel honoured to acknowledge.