Jesus and Violence: The Importance of René Girard II 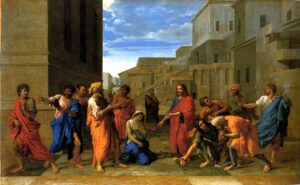 Jesus and the woman ‘taken in adultery’

Could this be the most troubling text in the whole of the Gospels? Certainly it seems to contradict entirely the Christmas promise of Luke 2:14: “Glory to God in the highest, And on earth peace, goodwill toward men!” How can these passages be reconciled, if at all?

Usually the attempt to explain Matt 10:34-36 is most successful when it points out that many Jewish families must have become deeply divided about Jesus himself, during and just after his three-year ministry  – and this is certainly effective as far as it goes.

However, the Catholic academic René Girard takes a very different tack – centred on his belief that what the Gospel is doing above all is revealing a universal human process of scapegoating: the projection of all of the potential violence in an archaic community onto an individual, as a means of limiting its violent impact on the community as a whole. 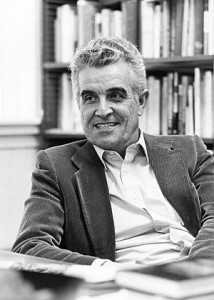 René Girard – explainer of the scapegoat

It is this process, Girard argues, that we are witnessing in multiple ‘all-against-one’ episodes throughout the Bible:  for example, in the stories of Joseph and his brothers, and of Susannah and the Elders. Both speak of mimetic desire – covetousness – the conflictual wanting of something that cannot be shared. In the case of the story of Joseph, this is the supreme favour of the patriarch, Jacob – symbolised by Joseph’s coat of many colours. In the story of Susannah it is Susannah herself – lusted after by two elders. In both cases, an individual suffers innocently at the hands of multiple others. Frustrated by Susanna’s refusal to comply with their lust, the elders together accuse her of adultery.  She is found guilty and about to be stoned to death – when her plea of innocence rouses the Paraclete – the advocate for the defence – through the young Daniel.  (Why this most beautiful story has never been filmed I cannot imagine.)

For Girard, our competitive desires must inevitably build up social tensions of this kind. Inevitably, in any society lacking an effective policing system and judicial process, they will boil over – and that, he argues,  was the virtually incessant condition of societies in the ancient world.

Thus, for Girard, when we read of the ‘suffering servant’ in Isaiah, or the episode of the ‘woman taken in adultery’ in John 8:3, we are witnessing the very same process, repeated again and again in ancient times. The social tensions arising out of mimetic desire were always supremely dangerous, because our inherent capacity for imitation can lead inexorably to a ‘struggle of all against all’.  At some point in the escalation of this tension of imitative violence, Girard believes, someone, or some group, would come to identify some isolated individual as the real cause of the contagion. This, for Girard, is the significance of John 11: 49-50.

‘And one of them, Caiaphas, being high priest that year, said to them, “You know nothing at all, nor do you consider that it is expedient for us that one man should die for the people, and not that the whole nation should perish.”‘

For Girard, therefore, this scapegoating process in ancient society was equivalent to a lightning conductor: it ‘saved’ the greater part of a community by sacrificing a lesser.

In the case of the ‘woman taken in adultery’, how many internal tensions might have been resolved within a given family by pointing at, and stoning to death, this single individual? She may well have been guilty of adultery, but was everyone else there innocent? Jesus’ response points to exactly what was going on.

If Girard is correct in seeing the story of the passion of Jesus in this way, he must also surely be correct in pointing out that the Bible is constantly directing our attention to the injustice of this scapegoating process. Joseph, Susannah – and Jesus above all – were entirely innocent – and the story of Jesus has revealed the wrongness of scapegoating for all time. It is simply wrong to target any  individual to deflect and discharge the collected aggression of an entire community.

But how then is this tension to be released? For Girard there are only two possibilities: in repentance and forgiveness on the one hand – or in the random conflicts between individuals that will otherwise be inevitable.

So, Girard believes, in warning us that he comes to bring a sword and not peace, Jesus is not saying that internal family feuding must happen, but that it will happen – because many will refuse the options of repentance and forgiveness. Jesus has removed from us the option of a familial violence targeted outward against a scapegoat, so – unless we repent and forgive one another – that violence must result in internal family feuds.

I find this in the end a complete explanation of Matthew 10: 34-36, in a way that does not require us to believe that Jesus’ intention is violence. In fact it is quite consistent with a belief that he seeks to lead us to a deeper peace that will never rest on the victimisation of anyone.  That is where we are historically still as a species – unable to opt decisively for repentance and forgiveness, also unable to justify scapegoating – and therefore subject to a violence that can erupt anywhere, anytime.