The Importance of René Girard : I – Mimetic Desire 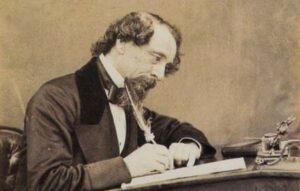 Great writers made the pen magical for this ‘wannabe’.

At the age of ten – c. 1953 – I threw an especially odious tantrum. Already an avid reader, I had the notion even then of becoming a writer of some kind. I had also decided that the first successful step of my ascent to literary grandeur must be the ownership of a very particular fountain pen, heavily advertised at that time. When my parents told me they couldn’t afford this I sulked hideously for a week over my blighted career. 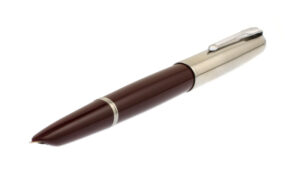 I remember this now because my complaint had absolutely nothing to do with any ‘ism’ that I was aware of – least of all ‘materialism’. The plastic, rubber, metal and other constituent materials of that gleaming object were not of the slightest interest to me. I had instead, and not for the last time, fallen victim to magical thinking – the attribution to a cloned advertised object of the power to enhance my own personal ‘nobody’ status. That particular pen alone, I had convinced myself, would surely make me a famous writer. The very inferior pen I already owned, although made of the same materials, was surely the reason I hadn’t yet written a novel and wasn’t already a celebrity.

Reflection on this, on other similar episodes in later life – and on the way that advertising works generally – has convinced me that the church’s standard diagnosis of the global plague of material accumulation is hopelessly off centre and misdirected. The charge of materialism implies to me that the feverish purchasing of inessential objects is driven by a deep interest in matter per se, or maybe even by a belief that nothing but matter exists. Nothing could be further from the reality that I have observed. The diagnosis of ‘materialism’ is totally ineffectual because none of us can see that we are actually guilty of it.

What is fundamentally wrong with us has nothing to do with any materialist philosophy, or with entirely innocent matter. Our basic acquisitive complaint – and it seems to be almost congenital – is deep and recurrent doubt as to our own personal value, accompanied by a deep desire to enhance it. Reinforced by media, and too often by other aspects of our surrounding culture, it is this complaint above all that makes us vulnerable to ‘iconic’ advertised objects designed to ‘change your life’.

Ireland’s Breda O’Brien once told the story of a friend exasperated by a teenage son. This boy had rebelled when his mother had tried to persuade him that it would be foolish for her to spend an extra €50 simply to enable him to wear the logo of a more expensive branded jacket. When she asked him why on earth she should do that he said, instantly: “Because I’m worth it!” A clever slogan designed to enhance the pulling power of an entirely different class of branded goods had lodged fast in this boy’s consciousness – to be deployed later to bully his own poor mother! 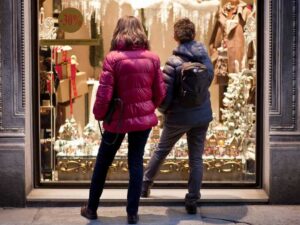 How would that look on me?

Here again, obviously, this boy was totally uninterested in the constituent material of the jacket. The brand logo – a simple memorable image – had become ‘iconic’ for him, a mysterious guarantee of the personal value and status that an unbranded item of exactly the same material could not give its owner.

This is not simply undifferentiated ‘wanting’ or ‘desiring’ either. Simple lack of food causes an entirely specific kind of wanting and desire, for which we have the precise name ‘physical hunger’. The wanting that fixates upon a particular ‘iconic’ object also surely deserves a specific and descriptive name, a name that isn’t ‘materialism’ either. (Isn’t food, even the Eucharist, material, after all, and clothing also – and don’t we need both?)

Mysteriously we don’t have in common use today a precise name for this particular desire for ‘iconic’ objects.

Thankfully, however, this kind of wanting now has a fully descriptive name, learned gratefully by me from the work of the American-French Catholic academician René Girard. He uses the pinpoint term ‘mimetic desire’ for that specific kind of desire that unconsciously mimics the observed desire of someone else – someone we mistakenly believe to be more highly valuable than ourselves. The power of most of the world’s multinationals is based on a deep understanding of how our mimetic desire can be manipulated to buy ‘designer’ objects of every kind – from clothing to cars, from lipsticks to the very latest smartphone or tablet computer. 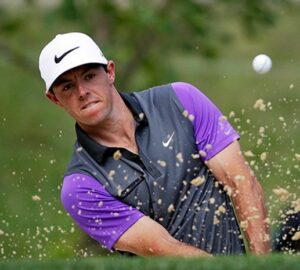 How to make a logo sell golf clubs!

Despite our obvious need to understand and resist this phenomenon, I have yet to hear a Mass homily on this problem of truly contagious mimetic desire. How has it come about that our clergy do not notice or speak insightfully about a pervasive problem of modern culture – a problem that is obviously also moral and spiritual?

This question becomes even more interesting in light of René Girard’s compelling argument that mimetic desire is the very problem denoted by the biblical word covetousness. How come that no homilist in my experience has ever noted that in the decalogue the triple warning against coveting links this sin in every case to something possessed by a neighbour, i.e. by someone we know? Surely that ox of the decalogue was the sleekest and strongest one, the one that belonged to the richest farmer in the community. Proud possession by someone else is crucial to the transmission of mimetic desire. It is usually the higher perceived status of the owner that transfers addictive desirability to the desired object. This is why celebrities are paid millions to use and to be photographed in association with big brand logos.

There is a further reason our homilists need to notice this. Girard shows convincingly that when mimetic desire becomes focused by two or more people upon anything that cannot be shared, real violence looms.  For Girard the Bible is the world’s greatest literary source of illustrations of this. Cain killed Abel because he concluded that Abel’s animal sacrifice had won God’s preference before Cain’s own sacrifice of grain. Desiring the intangible divine preference that Abel apparently now possessed, and the unattainable status that went with it, Cain went mad with jealousy and killed his brother. 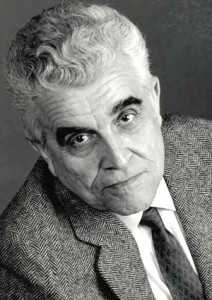 René Girard – Catholic academic who argues that biblical covetousness – or ‘mimetic desire’ – is the root source of all violence.

Similarly Saul hated the young David as soon as David had won the greater admiration of the women of Israel.  Joseph’s brothers sold him into slavery out of mimetic desire for the ‘coat of many colours’ – the garment that marked him as his father, Jacob’s, favourite. Absalom rose in rebellion against his father David out of mimetic desire for the kingdom of Israel. And the land of Israel’s ‘milk and honey’ – the produce of its richest soil – made it mimetically desirable to its neighbours, such as the Babylonians and later the Romans. There was even a near outbreak of violence among the apostles themselves, when they visualised one of their number being granted the highest status in heaven, next to Jesus himself. This is a clear echo of the story of original violence between brothers.

The Bible even tells us that the desire of the people of Israel to have a king was a contagious borrowing of an institution that ‘all the other nations have’. (1 Sam 8: 4,5) Could the reason for that particular mimetic desire be that surrounding kings were apparently better at the high-prestige art of warfare? 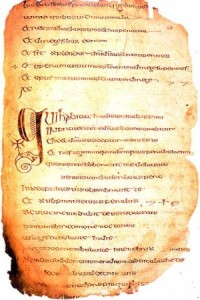 A page from the Cathach, the copy of the Psalter that may have led to the mimetic conflict between saints that caused Colmcille’s exile on Iona

As for violence and mimetic desire in Irish history, what about the extraordinary tale of the Cathach, the copy of the Psalter made by the young Colmcille from another copy owned by St Finnian?  It was this quarrel of two saints that reputedly led to the war that ended in Colmcille’s self-exile on Iona.

Centuries later it was rivalrous desire for the kingdom of Leinster that led to the conflict that brought the Normans to Ireland – and the competing desires of England, France and Spain led to many further troubles.  Far more recently, Charles J. Haughey’s absorption of the desires of 18th century Irish landlords led to the greatest scandal in living Irish political memory.

In the case of conflict in Northern Ireland, the legend of the red hand of Ulster is obviously also about mimetic desire.  What else do we need to explain the irreconcilability of the competing nationalisms that still plague the north-east?  Surely it is a mistake to point the finger exclusively at either of the competing traditions when essentially the same desire drives both – for possession of the security that goes with sovereign authority.

As for ‘consumerism’, today’s mass production of desirable objects has allowed the many rather than the few to possess apparently identical objects, hiding from us the full violent potential of mimetic desire in day-to-day life  (unless at end-of-year sales!). However, teenagers have been murdered in the US for possession of top-brand sneakers. And the sweat-house production of branded clothing in the developing world – an almost inevitable product of globalisation – has caused inexcusable violence to exploited workers, for example in the building of criminally unstable factories. Chinese factory workers have sometimes been driven to suicide by the terms of employment in factories that produce our highest status electronic goods.   Profit-driven multinationals, their managers dependent upon the favour of investors, seem too often indifferent to the pressures this creates for employees at the manufacturing base.  And those managers and investors too are likely to be mimetically driven – to afford higher-status homes, transport, personal technology and ‘bling’.  A world driven by unseen mimetic desire will necessarily be an abusive and unjust one.

René Girard (d. 2015) was writing about mimetic desire, and its connection with all kinds of violence, from 1961. He gathered around his mimetic theory a community of distinguished academics in the fields of sociology, anthropology, psychology, political science, philosophy, literary criticism, history and theology.  Probably no other modern intellectual is so influential in so many fields.  Having delved as a historian into just a fraction of this work I am convinced that Girard’s insight is set to have profound consequences for the future of Christianity, as well as for the social sciences and the arts – and even the second level school curriculum.  It is not going too far to say that Girard has brought the secular Enlightenment back to its roots in the Judeo-Christian tradition, and that his work is set to transform the relationship between the churches and the secular world.

In subsequent articles here I will develop this argument.