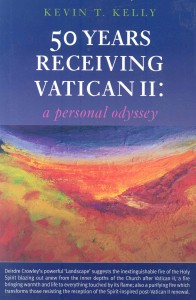 Vatican II is not past history but a treasure for us today. It has put people back at the centre of the Church’s teaching and pastoral ministry. Learning what this means in everyday life has been a challenge to Liverpool priest Kevin Kelly, for the whole of his more than fifty years in parish ministry and as a moral theologian. This collection of his writings, old and new, tells the story of his struggle to be faithful to the spirit of Vatican II, learning from experience and discerning the call of God’s Spirit in people’s lives. 2012 is the 50th anniversary of the opening of Vatican II. Many today are concerned that the Church is losing touch with the Vatican II agenda. This book reminds us that the task of receiving Vatican II is far from complete.

Among the many topics covered are: Lessons from the 1980 National Pastoral Congress; Vision and Spirituality of a Vatican II parish; Being parish priest in a shared Catholic-Anglican church; Spirituality of Homosexual Relationships; ‘Do it yourself’ Moral Theology; Reflections on the diminishing number of priests and the ordination of women; The New Translation of the Roman Missal, a flawed process; The Eucharist and Unity; General Absolution; Clerical Sex Abuse; Vatican II Celebration of the Eucharist; Divorce and Second Marriage; HIV Prevention, Women and Condoms; Retirement as a theological source; Dissent in the Church; The Changing Face of Moral Theology; An Adult Conscience; Believing in a Sinful Church; Vatican II Moral Theology in Practice’ Bernard Haring and Charles Curran; Listening to Parishioners.

About the Author
Kevin Kelly is a retired Catholic priest of the Liverpool Archdiocese, England. As well as serving as parish priest in inner-city Liverpool, Skelmersdale New Town and Widnes (a shared Catholic/Anglican church), he lectured in moral theology at Heythrop College in the University of London and Liverpool Hope University where he was awarded an Honorary Doctorate in 2007. A co-founder of the Association of Teachers of Moral Theology, he travelled extensively whilst a member of CAFOD’s HIV Advisory Group.