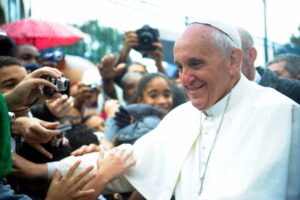 With the appointment of 13 new cardinals on October 25th, 2020, Pope Francis has now appointed a clear majority (57%) of the men who would elect his successor – were he to die or retire soon.

That does not mean they would necessarily elect a Pope Francis II, but the chances of that now look greater.

The appointment of Archbishop of Washington DC, Wilton Gregory, is seen by some as a significant sign of the the pope’s trust in black Catholic leaders. Archbishop Gregory led the US church’s response to the dire clerical child abuse scandals in the US church, following the ousting of Cardinal Bernard Law in 2002. He was also a strong critic of President Trump’s flaunting of the Bible to gain church leadership support in the midst of ‘Black Lives Matter’ protests, on June 1st, 2020 – following the global visual shock of the police killing of George Floyd in Minneapolis in late May.

For the full NCR report of these latest important changes to the upper tier of the church, click here.