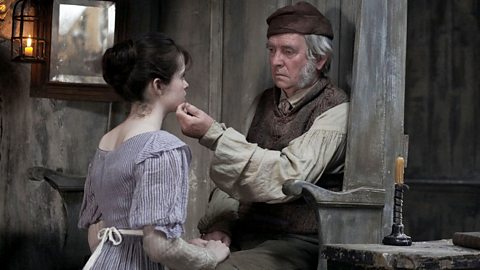 Claire Foy and Tom Courtenay, as Little Dorrit and Old Dorrit in a BBC adaptation of Dickens’s classic novel.

Little Dorrit, one of Dickens’s late and truly great novels, centres on the theme of captivity. Drawing as it did on the author’s own childhood experience of the Marshalsea prison for debtors (where his own father had spent time) it tells the story of the Dorrit family.

Briefly, Old Dorrit has been locked up in the Marshalsea for so long that he has become – at least in his own eyes – a worthy object of veneration. He deals with the shame of his indebtedness by playing the role of monarch of the prison. He affects the belief that visitors will feel privileged to pay tribute in small gifts of money for his upkeep. He converses with these as though bestowing honour on respectful envoys from foreign lands.

His daughter Amy, Little Dorrit, was born in and has grown up in the Marshalsea – and is stunned when an investigation reveals that, to a vast fortune trapped in legal confusion in the world outside, her own father, Old Dorrit, is the true heir.

Released from the Marshalsea in splendour, the family undertakes a European Grand Tour. In Venice eventually, residing in a luxurious villa, Amy is troubled to observe that:

“A perfect fury for making acquaintances on whom to impress their riches and importance has seized the House of Dorrit… It appeared on the whole, to Little Dorrit herself, that this same society in which they now lived greatly resembled a superior sort of Marshalsea.”

In just these two sentences Dickens reveals that Old Dorrit’s real prison had not been the Marshalsea, or even London. It was portable. He had carried it with him from London to Venice, in his own head. It was the prison of his own fixed conviction that his dignity and value were absolutely at the mercy of the judgement of others.

So profoundly insightful is this, into the nature of human self-imprisonment – and into the current global plague of digital attention-seeking – that Little Dorrit should be on the curriculum of every second-level school and university. For with the Internet has come a perfect fury for making acquaintances on whom to impress our own grandeur  – and even teenagers look to carry with them everywhere the means by which this fury can be satisfied at a moment’s notice. No longer needing to go to Venice to make new and better acquaintances, they can set up court anywhere, any time – even at the family table or under the bedclothes at 3 a.m. 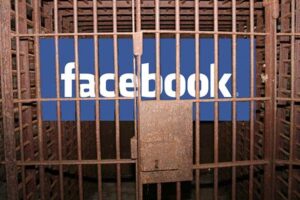 Immediately here I will be refuted, no doubt: the Internet and the mobile phone also offer far greater freedom than is possible in complete isolation. We are free to learn whatever we wish, and to grow. We can escape from the narrowness of a small town or village, or even from the confinement imposed by a disability or terminal illness – to explore the world’s artistic and natural treasures.

So we can – but what is the current craze for Mindfulness about if not the realisation that over-stimulation and information-deluge are also dangerously oppressive – that we absolutely need to isolate ourselves in stillness, in a disciplined routine, to remain sane? And why is the addiction and mental disturbance of adolescents now so great a threat? The answer is surely that the Internet has intensified for us humans a serious aboriginal problem: we are congenitally uncertain of our own value, and dangerously prone to self-harm in the means we take to address this.

It is surely upon this very weakness – our need for the ‘positive regard’ of other humans, and our fear of their rejection – that the power of ‘social media’ – and of a host of predators – rests. How could fortunes be made from the creation of many thousands of false Internet identities – known as ‘bots’ – to be sold to the highest bidder – if not for the irrational global craze for ‘followers’ and ‘friends’ and ‘likes’? Many, many millions today have become convinced by the Internet that their value and destiny – the meaning of their own lives – is ‘socially mediated’. 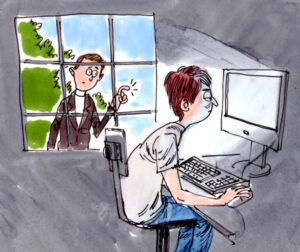 Has any Irish clergyman yet dared to do this?

Who is passionately opposing that belief? Is it not refuted by the Christian teaching that our value as individuals is not variable with social opinion, or any ‘media’, but both sacred and fixed with our eternal identity, by birth? Why have I yet to hear a Mass homily, or read a pastoral statement from a bishop, that will emphatically say so?

To ‘redeem’ someone was originally to buy them out of real slavery.  Apparently at a loss to explain nowadays the meaning of Christian ‘redemption’, clergy seem blind to the power of Christian faith to address the tendency towards self-delusion and self-imprisonment revealed by the Internet. Too often demoralised by the power of media to reveal clerical feet of clay, our clergy in Ireland have yet to recognise the opportunity and the need that the Internet has created: to insist upon the constant, sacred and equal value of every person and to forcefully condemn the deadly scams and the trolling that social media too often foist on the most vulnerable.

No wonder that, absorbed by the small screen that promises ‘viral popularity’, teenagers so often find the church irrelevant to their lives – even while the Gospel insists that its Lord was forever rescued from the rejection of his own society by a power that transcends all human judgement.

Just when will our Irish clergy stumble over the full import, in our own time, of Jesus’s declaration in John 16: 33. “In the world you will have hardship, but be courageous: I have overcome the world.”  Why is it so difficult to see that the wholly unreliable judgement of ‘the world’ is now mediated to everyone, 24/7, by the ‘Net?