A Question of Conscience by Tony Flannery (2013) 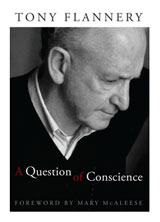 In February 2012 Tony Flannery, a Redemptorist and founder member of the Associ­ation of Catholic Priests in Ireland, bestselling author and regular columnist with Reality magazine, was informed that the Vatican watchdog, the Congregation for the Doctrine of the Faith (CDF), was unhappy with some of his writings relating to the priestly ministry in the Church. Tony was summoned to Rome and told that until he revised his views he would not be allowed to minister as a priest or have any dealings with media. He was to step down as leader of the ACP.

Although he offered a statement of clarification and it seemed as if the matter were closed, a few months later the CDF made further demands that were unacceptable to him. He was required to issue a statement that he accepted all the moral teachings of the Church and that women could never be ordained priests. The CDF forbade him to return to priestly ministry, or be involved with the ACP, until he agree to publish this statement. He was put under ‘formal precept of obedience’ not to attend the AGM of the ACP (He did attend it.).

During the time in question, the greater part of a year, the CDF never communicated directly with Tony Flannery. Documentation came through Michael Brehl, leader of the Redemptorists. It was on typed A4 pages without heading, stamp or signature. The CDF warned him about the need for total secrecy and threatened with excommunication and dismissal from the Redemptorists.

Tony Flannery became convinced that he would never be allowed to return to ministry and that the real target of the CDF was his role in the Association of Catholic Priests. He went public on the matter in January 2013. A Question of Conscience, which reproduces the CDF documentation relating to this case, provides conclusive proof of the Vatican’s determination to stamp out what it regards as dissent, no matter how unjust and devious the methods it uses.
About the Author
Tony Flannery, C.Ss.R., was born in Attymon, County Galway and has been a Redemptorist priest for over thirty years. He has a large following as a preacher and retreat master. His previous publications include Keeping the Faith, The Death of Religious Life, and From the Inside.