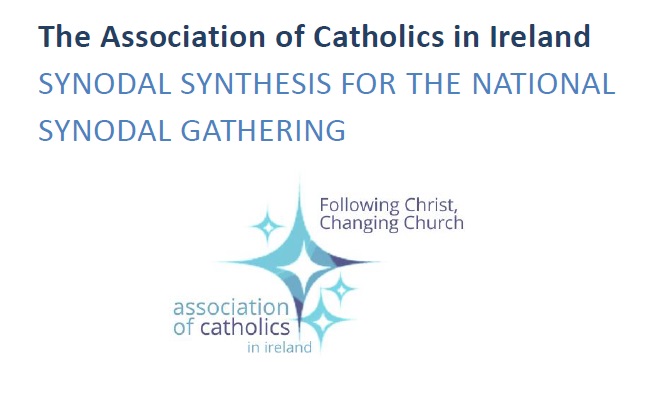 The Association of Catholics in Ireland started in November 2012 at a meeting of over 300 people in the Regency Hotel, Dublin, to discuss the participation of laity and the need for reform and renewal in the Church. The Association is committed to a reform and renewal agenda in the Irish Church in the spirit of Vatican II. We are committed to a Church that is inclusive and accepts the equality of all by virtue of their baptism. Our activities have included talks, conferences, meetings with bishops, submissions to the Vatican and the Irish bishops on the Synod for Families, and the World Meeting of Families. Our most recent campaign is on the Vatican II document Lumen Gentium article 37 which requires structures to be made available for the laity to express their opinions and participate in the mission of the church. We have a very active website, www.acireland.ie, and Facebook page with news on national and international church matters.

Pope Francis has been speaking about synodality since 2015 when he called for a listening church, walking together in synodality. The Synod of Bishops ‘For a Synodal Church: Communion, Participation and Mission’ will be held in Rome in October 2023. The Irish bishops responded by embarking on a Synodal Pathway leading to a National Synodal Assembly within five years. The ACI have wholeheartedly embraced this initiative by Pope Francis and the Irish bishops, seeing it as the first time the People of God have been given the opportunity and a structure to express their opinions on the state of the Church and how the Holy Spirit might be guiding us for the future.

We have run a series of nine talks to create awareness of synodality – 40 minutes for the talk and 40 minutes for the questions and answers. This provided an opportunity and the vocabulary to enable the laity to examine the synodal process to determine how we can make an effective contribution. The talks featured a wide range of excellent speakers, including Dr. Nicola Brady, Chair of the Steering Committee for the Irish National Synodal Assembly, Prof. Linda Hogan, Chair of Ecumenics TCD, Tom Inglis, sociologist and author, Kate Moynihan, CEO LINC advocating for lesbian and bisexual women, Rose O’Connor, Limerick Synod and Chair Women in Church Leadership, Prof. Thomas O’Loughlin, Historical Theology Nottingham University, Fr. Brendan Hoban, Killala Synod, Fr. Sean McDonagh, eco-theologian, and David Timbs, Australian National Plenary Council. The talks were well attended, representing all the People-of-God, laity, priests and bishops.

Following the invitation to participate from the Synodal Pathway Task Group, we held a Synodal Gathering via Zoom on 5th May. The contributions were captured and a questionnaire provided for participants to complete and return.

Our Synthesis has been prepared from the following inputs:

The contributions have been collated under the themes used by the Dublin Diocese Synodal Gathering process, Joy, Sorrow, Hope and Fear. For people submitting the questionnaire, we posed an additional question – ‘What are your greatest wishes and best hopes for the Church?’ to find the vision people have for the Church when no constraints are placed on them.

WHAT BRINGS YOU JOY

The major sources of Joy were expressed as community and participation in the Sacraments and liturgy.

WHAT BRINGS YOU SORROW?

It is not surprising that the most frequent mention of experiences that brought sorrow or feelings of sadness were themes of clericalism, the abuse scandals, the treatment of women in the church, the church’s irrelevance to young people, the treatment of LGBT+, Catechesis, and the reduction of Sacraments of First Communion and Confirmation to rites of passage.

WOMEN AND THE CHURCH

CATECHESIS AND THE SACRAMENTS

WHAT BRINGS YOU HOPE

The greatest source of hope identified has to be this Synodal journey initiated by Pope Francis and the possibility that change, reform and renewal of the Church may happen.

WHAT BRINGS YOU FEAR/ANXIETY

The overriding fear is that the Synodality process will fail, that the Universal Synod of Bishops in 2023 will not deliver reform – with the result that the Church will continue to decline and contract / disappear.

GREATEST HOPES AND WISHES FOR THE CHURCH

We asked the question “what are your greatest wishes and best hopes for the Church?” to find out what kind of vision people have for the Church when no constraints are placed on them. The common converging themes that emerged were as follows.

PEOPLE WISH FOR DEEP AND FUNDAMENTAL REFORM OF INSTITUTIONAL STRUCTURES INSPIRED BY JESUS AND THE GOSPEL MESSAGE:

LAY MEN AND WOMEN WILL PARTICIPATE FULLY WITH POWER DIVESTED FROM AN EXCLUSIVELY CLERICAL GOVERNANCE SYSTEM:

A WELCOMING INCLUSIVE COMMUNITY FULL OF VIBRANCY AND CELEBRATION. WHERE OUR BELIEFS TRANSFORM EVERYDAY LIVES TO WORK FOR JUSTICE, PEACE AND EQUALITY FOR ALL:

MODEL OF PRIESTHOOD WILL BE RESTORED TO NEW TESTAMENT PRESBYTER RATHER THAN OT PRIEST:

SMALLER MORE INTIMATE COMMUNITIES BASED ON EARLY CHRISTIAN CHURCH THAT ARE:

A NUANCED UNDERSTANDING OF THE MYSTERY OF WHAT WE CALL “GOD”:

THAT THE CHURCH WILL MEET SOCIETY WHERE IT IS AT TODAY WITH:

THAT IT BECOMES A COMMUNITY GUIDED MORE BY THE BEATITUDES AND LESS BY COMMANDMENTS:

WHAT THE HOLY SPIRIT IS SAYING TO US

Karl Rahner said: “In the days ahead, you will either be a mystic or nothing at all.” It would be wonderful to say that the Holy Spirit had spoken to us but our conclusions have been formed by 15 months of meetings, discussions, questionnaires and discernment involving hundreds of participants. The strong messages of this discernment are:

You can download a PDF  of this Synthesis Document here.