Marianella 360 – some of the gathering on March 8th in Rathgar, Dublin City

On Saturday 8th March ACI members gathered from many parts of Ireland to seek insight and inspiration on the task of mobilising reform-minded Irish Catholics to catch the wind of change now blowing even from the centre of the church.

Here some of those who attended recount their responses to the day. We want as many of these reactions as possible, so please keep them coming!

Teresa Mee is a returned missionary sister, with long experience of the impact of liberation theology in Brazil. 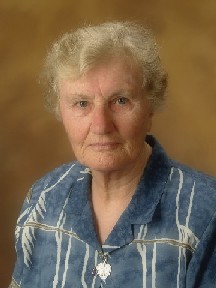 The threefold Aim of this ACI workshop:

First, clarifying and familiarising ourselves with what ACI is all about, and where it’s going;
Second, up-skilling in leadership for individuals – in promoting, starting and developing new ACI sub-groups across Ireland;
Third, clarifying and familiarising ourselves with the outline of the National Conversations Project, its immediate and ultimate objectives and the steps towards its takeoff.
The workshop provided a template of what we are trying to achieve, modelling some essential tools, actions, processes, dynamics. It also sought to provide some up-skilling in the techniques we will need for initiating and developing ACI subgroups. 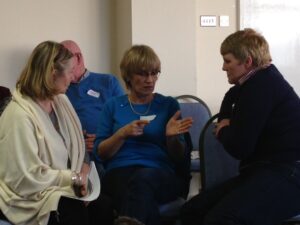 I thought the day provided a rich opportunity for meeting many established and prospective ACI members – men & women of all ages upwards of the thirties or so from Dublin, Cork, Kerry, Kilkenny, Galway, Meath, Cavan, Derry, Down… and from as far away as Prague.

Name tags (those that hadn’t fallen off people’s shirts/blouses) facilitated informal mutual introductions and sharing throughout the day. (Maybe, for next session, some plastic nametag holders could be provided together with name tags – and collected before end of the final session of the day.)

Break times providing for tea/coffee refreshment and informal getting to know each other, sharing on what has come across in the session, buzzing around like bees distributing and collecting riches, and enhancing interest in the workshop/meeting and enjoying. (Budgeting a little more time for this may not have been possible within the day’s framework.)

Storytelling and role play engaged the group quite strongly and got a few powerful basic messages across to me. 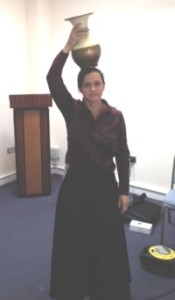 The Woman at the Well

I lived through the experiences of the Samaritan woman, which were:

She exhibited a strong sense of self and of drive (leader) in her ability to reflect on the wider social context of what was happening at the well and focus on the person, his person and her own person.

She’s picking up all the vibes in her conversation with him, including his sense of humour, and she’s ready with her answers and her dodging of his questions until she becomes convinced that he means well, is genuinely interested in her as a person. She recognises that he has risen above the unjust religious system and he enters into dialogue with her on that.

She had worked out her value system within the limitations of her social and economic condition and made no apologies for her trade. Now she’s able to be open with him. Now she’s listening deeply; he’s helping her re-evaluate.

She becomes so turned on she whips off to town without her bucket and ‘leads’ the multitude to Jesus.

The power of Jesus with that woman and ’her demons’ rests in his ability to listen deeply to her as a human person, draw her out, offer an alternative. (N.B. Simon Community in Dublin)

Aideen made a great job of the message through that story, as the evangelist who composed it had done, to enable us internalise a deep and challenging message.

I had not thought much about it before, but now I see the power of storytelling followed by reflection. There are several facets to it but I’m seeing it in the context of the theme of the day – leadership and leadership potential, and developing of leadership.

I don’t agree with the idea that ‘thinking’ is the most basic element of leadership. Starting with where the person is at requires ‘listening’ and deep listening is very powerful.

Brian Grogan could have given us a talk on how to publicise the Conversations project and we could have gone away with a sheaf of notes, or, easier still, handouts to put in the drawer. 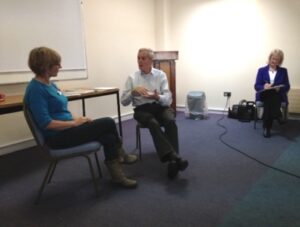 Instead we were left labouring with Jo O’Sullivan on whether we were prepared to engage in publicising the event, and if so, how to set about it. We weren’t handed out any list of answers. Time for us to start being proactive. Now we know what the challenge is, so let’s get on our bicycles.

There is much more one could say by way of appreciation: Noel’s clear presentations on Conversations, ACI expansion and serving as umbrella group, the image of firm creative leadership for service that he puts across and the wonderful team of equals he enjoys.

Sean O’Conaill writes in Irish Catholic media on the challenges facing the Irish Church, especially the challenge of changing structures that lend themselves to the abuse of church members and to the slow death of the Church.

Here are the key ideas I brought with me from Marianella as I headed north to Coleraine on Saturday March 8th: 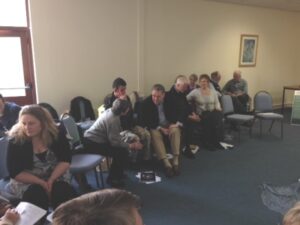 If I am to influence anyone to mobilise for change in the wake of decades of disaster – and now a breath of spring from Rome – I need to be closely in touch with the struggles of those around me in my own northern context.

All planning for any meetings must involve previous one-to-one communication with the people I would hope to bring together – to listen to them rather than to speak myself. Intensive forethought is required if those who attend are going to find hopeful leadership that has a grip of both their individual and common struggles – and a vision of how to proceed.
For ACI to succeed it will not be enough to gather those of like mind to share common grievances about the current state of the church. If an attitude of ‘what’s the point?’ is not to set in, meetings will also need to provide nourishment and to engender hope.

I was greatly enthused by the Well-Springs day, and by the opportunity to meet more ACI members.

Here in Coleraine in my parish we are having Lenten discussions of Evangelii Gaudium, starting Wednesday 12th March. Preparing for this I am putting into action some of the things I took away from Marianella – especially the need for one-to-one contact beforehand.

I will listen hard at these discussions to try to get a sense of where my neighbours are in their heads just now – with a view to discerning readiness for ACI-style meetings. With a new bishop of Derry soon to be installed, there may be room for hope of a different, more expectant, general mood. Let’s see!

“I dream of a ‘missionary option’, … capable of transforming everything so that the Church’s customs, way of doing things, times and schedules, language and structures can suitably be channelled for evangelization of today’s world rather than for her self-preservation.” (27)

Understanding ‘evangelisation’ to involve the building of a dynamic faith in the power of God to empower the people of God, and to free them from a malignant and fearful clericalism, I see Evangelii Gaudium as a charter for the ACI programme, and draw hope from the Well-Springs day.