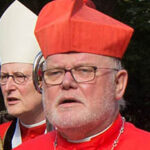 So declared the Cardinal Archbishop of Munich, Reinhard Marx, in a recent interview – on the brink of another session of Germany’s ‘Synodal Path’.

In 2019, Cardinal Marx supported a call by bishops in the Amazon region for the ordination of married men as priests – to address a clergy shortage there, but stopped short of calling for a global recognition of married priests.

He has made it clear that he is not speaking of an end to the option of priestly celibacy, just the allowing of an alternative.

A close confidant of Pope Francis, Cardinal Marx sees recovery from the devastating impact of a 2018 report on clerical sexual abuse in the German church as the highest priority there.

The progress of the German ‘Synodal Path’ has been turbulent, with some Roman ecclesiastical voices speaking of the dangers of ‘schism’ – another split in the church.