Always in our midst… 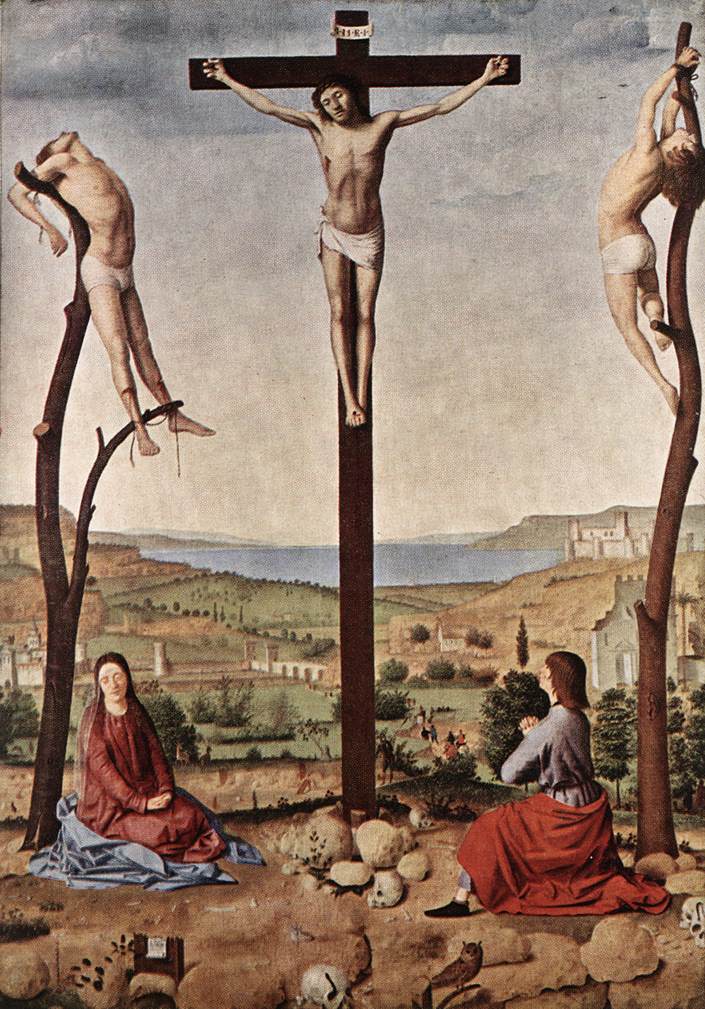 Pilate then had Jesus taken away and scourged; and after this, the soldiers twisted some thorns into a crown and put it on his head and dressed him in a purple robe.

They kept coming up to him and saying, ‘Hail, king of the Jews!’ and slapping him in the face.

Pilate came outside again and said to them, ‘Look, I am going to bring him out to you to let you see that I find no case against him.’

Jesus then came out wearing the crown of thorns and the purple robe. Pilate said, ‘Here is the man.’

When they saw him, the chief priests and the guards shouted, ‘Crucify him! Crucify him!’ Pilate said, ‘Take him yourselves and crucify him: I find no case against him.’

The Jews replied, ‘We have a Law, and according to that Law he ought to be put to death, because he has claimed to be Son of God.’

When Pilate heard them say this his fears increased.

Re-entering the Praetorium, he said to Jesus, ‘Where do you come from?’ But Jesus made no answer.

Jesus replied, ‘You would have no power over me at all if it had not been given you from above; that is why the man who handed me over to you has the greater guilt.’

From that moment Pilate was anxious to set him free, but the Jews shouted, ‘If you set him free you are no friend of Caesar’s; anyone who makes himself king is defying Caesar.’

Hearing these words, Pilate had Jesus brought out, and seated him on the chair of judgement at a place called the Pavement, in Hebrew Gabbatha.

It was the Day of Preparation, about the sixth hour. ‘Here is your king,’ said Pilate to the Jews.

But they shouted, ‘Away with him, away with him, crucify him.’ Pilate said, ‘Shall I crucify your king?’ The chief priests answered, ‘We have no king except Caesar.’

So at that Pilate handed him over to them to be crucified. They then took charge of Jesus,

and carrying his own cross he went out to the Place of the Skull or, as it is called in Hebrew, Golgotha,

where they crucified him with two others, one on either side, Jesus being in the middle.

Pilate wrote out a notice and had it fixed to the cross; it ran: ‘Jesus the Nazarene, King of the Jews’.

This notice was read by many of the Jews, because the place where Jesus was crucified was near the city, and the writing was in Hebrew, Latin and Greek.

When the soldiers had finished crucifying Jesus they took his clothing and divided it into four shares, one for each soldier. His undergarment was seamless, woven in one piece from neck to hem; so they said to one another, ‘Instead of tearing it, let’s throw dice to decide who is to have it.’ In this way the words of scripture were fulfilled: They divide my garments among them and cast lots for my clothes. That is what the soldiers did.

Near the cross of Jesus stood his mother and his mother’s sister, Mary the wife of Clopas, and Mary of Magdala.

Seeing his mother and the disciple whom he loved standing near her, Jesus said to his mother, ‘Woman, this is your son.’

After this, Jesus knew that everything had now been completed and, so that the scripture should be completely fulfilled, he said: I am thirsty.

A jar full of sour wine stood there; so, putting a sponge soaked in the wine on a hyssop stick, they held it up to his mouth.

After Jesus had taken the wine he said, ‘It is fulfilled’; and bowing his head he gave up his spirit.

It was the Day of Preparation, and to avoid the bodies’ remaining on the cross during the Sabbath — since that Sabbath was a day of special solemnity — the Jews asked Pilate to have the legs broken and the bodies taken away.

Consequently the soldiers came and broke the legs of the first man who had been crucified with him and then of the other.

When they came to Jesus, they saw he was already dead, and so instead of breaking his legs

one of the soldiers pierced his side with a lance; and immediately there came out blood and water.

This is the evidence of one who saw it — true evidence, and he knows that what he says is true — and he gives it so that you may believe as well.

Because all this happened to fulfil the words of scripture: Not one bone of his will be broken; and again, in another place scripture says: They will look to the one whom they have pierced.

After this, Joseph of Arimathaea, who was a disciple of Jesus — though a secret one because he was afraid of the Jews — asked Pilate to let him remove the body of Jesus. Pilate gave permission, so they came and took it away.

Nicodemus came as well — the same one who had first come to Jesus at night-time — and he brought a mixture of myrrh and aloes, weighing about a hundred pounds.

They took the body of Jesus and bound it in linen cloths with the spices, following the Jewish burial custom.

At the place where he had been crucified there was a garden, and in this garden a new tomb in which no one had yet been buried.

Since it was the Jewish Day of Preparation and the tomb was nearby, they laid Jesus there.