Amazonia, Brazil, to have married priests? 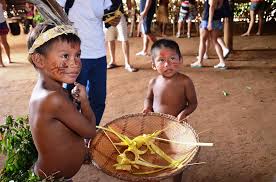 Catholic bishops of Amazonia, Brazil, will meet in Rome in October 2019 – with the possible ordination of mature married men on the agenda. This was confirmed by a Vatican working paper dated June 17th, 2019.

For half of the church’s long history priests priests could marry – which means that the church does not deny that when Jesus instituted the sacrament of ordination he was deliberately ordaining married men.

The Amazon synod has been called by Pope Francis – to focus on protection of the indigenous people and the environment in this vast region.

Priestly celibacy – again in question in Ireland and wherever the celibate cohort of priests is dwindling – is not church dogma; it is a legal requirement that can be changed.

In his report of this news in the National Catholic Reporter, the Jesuit Thomas Reeese observes:

He also thinks it likely that:

‘Eventually, as in other churches, married clergy will be the norm rather than the exception.’

For one thing, Reese notes, ” there are currently too many priests in relationships with women that should be legitimized out of justice to the women involved, let alone their children. And then there are the thousands of priests who left to get married. How about letting them back into ministry?’

Increasingly in Ireland an ageing priesthood is failing to engage the interest of young people – who reportedly can’t see what the Gospel and the Eucharist have to offer themselves by way of inspiration and nourishment. Might those Irish priests who left ministry to marry and have families be able to address this critical problem, by virtue of their own parental experience?

And might they also be less fearful of dialogue with lay people – and help to ‘free up’ the Irish church at last?

For the full NCR article on this pending event in Amazonia, click here.

For other detail on this in the Catholic news service Crux, click here.