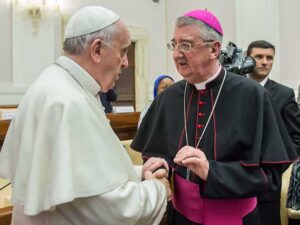 “I could spend all my time being concerned about the people who come to church, but they’re — you know I don’t want to be nasty — but they’re a dying breed. … The situation is changing, but Irish Catholicism hasn’t changed with it.”

Attributed to Archbishop Diarmuid Martin of Dublin, this quote from an article in the New York Times on December 2nd 2017, came in for strong pushback from the Irish Catholic on December 7th.  In an article headed “Archbishop accused of demoralising effect on priests“ the paper quoted copiously from the psychiatric criticism of Professor Patricia Casey of UCD.  She argued that the reference to observant Catholics as a ‘dying breed’ was both negative and unlikely to spark the interest of young people – whose absence from so many of his churches was observed by the Archbishop as early as 2006.

Archbishop Martin has justly won international praise for his handling of the acute crisis that faced the Dublin Archdiocese in 2003 when he was named as coadjuter to Archbishop Desmond Connell, then under siege.  For victims of clerical sexual abuse in the archdiocese he represented a distinctly ‘new broom’.  Adept in responding to the media storm in the years that followed, he is credited by some with the following admission by the Irish Bishops’ Conference in December 2009, in the wake of the Murphy Report:

“We are deeply shocked by the scale and depravity of abuse as described in the Report. We are shamed by the extent to which child sexual abuse was covered up in the Archdiocese of Dublin and recognise that this indicates a culture that was widespread in the Church. The avoidance of scandal, the preservation of the reputations of individuals and of the Church, took precedence over the safety and welfare of children. This should never have happened and must never be allowed to happen again. We humbly ask for forgiveness.”

This marked a substantial shift in the readiness of Irish bishops to admit the term ‘cover up’ in their handling of allegations of abuse, and must never be forgotten in any assessment of Archbishop Martin’s term in Dublin.

However, if ‘Irish Catholicism hasn’t changed’ in the fourteen years of that term, can he himself be completely exonerated?  Granted, his strong performance on the Murphy Report was certain to alienate at least some of the Dublin clergy, and this in turn was likely to impede the lively development of parish pastoral councils, which he also strongly promoted.

However, why does the diocese still lack a forum for whole-diocese deliberation on its pastoral needs – if the archbishop is so strongly in favour of change?  And why is the capital of Ireland leaving it to e.g. Limerick diocese to experiment with a diocesan synod, when Archbishop Connell was known to have one planned for Dublin at the end of his term?

Time and again in the intervening period Archbishop Martin has asserted that the central problem of the Irish church is not structural but a matter of insufficient faith.  As early as 2005 he said the following:

“My primary interest … is in seeing that as many Irish men and women as possible in 2030 will be allowing themselves to be daily “surprised by the Gospel” and will be attempting to make that leap of faith and then shaping their lives coherently according to consequences of their belief.

” Whether that happens or not will be determined by the style and the pastoral structures of the Church today.   I believe, for example, that many in our society fail to make the leap to faith, because we, as Church, as an institution and as a community of believers, have never made that leap to the full.  We have never fully abandoned ourselves to the God who can make us free, but still cling on to the things we falsely feel can bring us security.  Faith is always a leap in the dark, but in the confidence that Jesus has not left us orphans.  We will never be able to lead others into the depths of faith and the joy of our hope if we remain entrapped in the limitedness of our current world vision.”

Elsewhere the Archbishop has lamented the lack of an educated and vociferous Irish laity who could effectively stem the tide of secularism, as in his Würzburg address earlier this year:  “The Church in Ireland is very lacking precisely in ‘keen intellects and prolific pens addressing the pressing subjects of the day’”.

If the archbishop is so keen to encourage ‘keen intellects and prolific pens’ what efforts has he made to seek out and develop such talents in his own archdiocese?  Did he ever consider doing what Pope Francis has done – the creation of an entirely new personal advisory team, consisting of both lay men and women and forward-looking clergy?

And what of the apparent failure of Catholic Social Teaching to penetrate the minds of Dublin’s political intelligentsia – in relation to the problem of homelessness, for example?  Did it never occur to him to seek resourcing for a regular annual Dublin conference centred on that very fount of Catholic wisdom – as a means of addressing the very intellectual deficit he so often complains about?

Too glibly dismissed as ‘Blessed Martin of Tours’ by some Dublin clergy for his distant lectures on the state of the Irish church, the Archbishop must nevertheless bear some responsibility for the undeveloped state of what should be Ireland’s flagship diocese – especially when it comes to the obvious structural and dialogical deficit.  Was he himself over-inhibited by fear of a ‘leap in the dark’ when it came to faith in his own people?  And over-inclined to believe that he should accept a distant invitation to lecture abroad, rather than take that travelling and speaking time to listen at home instead?  Why can he not understand that the absence of regular, structured opportunities to listen to his own people is a clear barrier to the change he professes to support – and a scandalous barrier to faith also?

Given Archbishop Martin’s own age (72 this year), merely to dismiss observant Catholics as a ‘dying breed’ comes across to me as a combination of both arrogance and presumptuous ignorance – not to mention lack of faith in the power of the Holy Spirit to grant insight to any of the baptised.  Has he somehow concluded that only he could be a conduit of graced wisdom in his own diocese?

Too long out of Dublin to be sure of my own grasp of the detail of that whole situation I can only raise these questions here.  I am glad of Archbishop Martin’s frank courage on the abuse issue – but frankly disappointed that my own native city is not visibly much further advanced in developing the ‘role of the laity’ since I left it in in 1966.