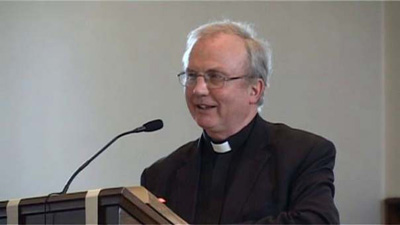 To meet the objections of some to the Derry Journal’s presentation of a recent article by Bishop Donal McKeown, he has given us permission to publish the full article below. Clearly it was intended simply as a response to Pope Francis’s call for prayers on a specific topic – not as an intended policy statement on the full range of issues confronting the church in Ireland, or Derry diocese, at this time.

The Pope’s Worldwide Prayer Network. Intention for May 2020.

“For Deacons:
We pray that deacons, faithful in their service to the Word and the poor, may be an invigorating symbol for the entire Church.”

On May 23rd, 1976 in the Pontifical Irish College in Rome, I knelt before Bishop Dominic Conway and was ordained a Deacon. Eight years after I entered seminary, this was a big day. It involved taking various promises, including that of celibacy. But, for me and my classmates, it was just one more step in preparation for priestly ordination one year later. That was the real goal.

But in the last 50 years, there has been a renewed discovery in the Church of the Permanent Diaconate as a ministry in itself – and not just as one stage on the way to priesthood. Thus, many countries – and some dioceses in Ireland – have ordained men (often married) as Deacons to serve in their parishes.

They have gone through a four-year period of preparation and study. And they are entitled to proclaim the Gospel and preach, to celebrate Baptism and Weddings. Some have also been involved as hospital or prison chaplains. Or they often say the prayers at gravesides. They may well undertake other faith formation roles in their community. Many parishes – and older priests – have benefited from their being available.

It is for these men that Pope Francis asks us to pray in May 2020. And the Holy Father is specifically seeking prayers for their ministry in the service of the Word of God and of the poor.

However, some people have objected that ordaining deacons is simply ‘clericalising’ more men – and sometimes doing jobs that lay men and women could equally well do. However, it should be noted that Pope Francis recently set up a Commission to consider whether women might be ordained deacons.
(Cf https://www.vaticannews.va/en/pope/news/2020-04/pope-commission-women-deacons.html)

I would make three points about what role the Permanent Diaconate might have in the Diocese of Derry.

Firstly, there is clearly a growing need to find support for priests in the many tasks that they have to take on. Clearly, deacons might well be ‘useful’. But Diaconate is a ministry in its own right, not just a part-time help for priests. Pope Francis is clearly indicating that Deacons would have a symbolic and sacramental value in the Church – and not just be extra ‘man-power’. Men would be asked to discern a specific call to Diaconate and not just to fill gaps in a particular model of Church.

Thirdly, over this past year, I have met a few women in the Diocese who have expressed an interest in becoming Consecrated Virgins. These are not women who feel called to join a religious congregation. Rather, members of the Ordo Virginum live as ‘brides of Christ’ but go about their daily lives. They are specifically mentioned in the early Church and in modern Canon Law. As with deacons, aspirants go through a period of formation – and their Consecration is normally carried out by the Diocesan Bishop. (cf http://www.vatican.va/roman_curia/congregations/ccscrlife/documents/rc_con_ccscrlife_doc_20180608_istruzione-ecclesiaesponsaeimago_en.html)

As Pope Francis asks us to pray for Deacons, their work and what they symbolise, perhaps this is a time for a conversation about whether God is calling Derry Diocese to introduce both the Permanent Diaconate and the Order of Virgins at the same time. Can we make that another topic for our prayer at this time of challenge and change?