Can laypeople lead a parish? Look to Louisville, KY, USA 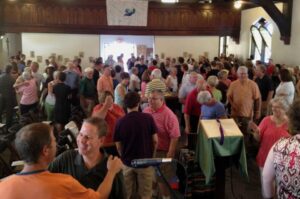 Louisville parishioners, Kentucky, USA – at the Sign of Peace

(This article is republished here with the permission of the National Catholic Reporter, USA)

LOUISVILLE, KY. — In his recent book Worship as Community Drama, sociologist Pierre Hegy described an unusual Catholic parish whose identity he hid under the name Church of the Resurrection. When the book was published earlier this year and we read the chapter titled “A Lay-Run Parish: Consensus Without a Central Authority” we could tell that it was about us.

I asked Hegy about possibly revealing the facts behind the chapter. He replied that sociological protocols had to be followed in the book, but these would not apply to an article in a newspaper. OK, here goes.

For almost 30 years, the St. William Catholic Community in Louisville, Kentucky, has had a lay parochial administrator but, even before that, all-important decisions were made by the people of the parish.

Founded in 1901 to serve Irish immigrants who worked in the nearby railroad yards, membership was down to 85 by the early 1960s as railroad workers were displaced by computers to disassemble and reassemble freight trains passing through Louisville. The crashing together of boxcars and flatbeds can still be heard in summer when the church windows are open. We had decided sometime back not to install air conditioning in an effort to save energy and do our bit to preserve the environment.

No one knows why the parish was named St. William, or which St. William the bishop had in mind, but some point out that the bishop at the time was named William and hint at a personal motive. Around 1995, the parish adopted St. William of Donjeon as its patron, a medieval monk who objected to being chosen bishop and who was known for ministering to the poor, the sick and the imprisoned. Clearly our type of guy.

Faced with the option to close the dwindling parish in 1969, Archbishop Thomas McDonough decided to put it in the hands of a young priest named Ben O’Connor, suggesting that he try implementing the liturgical changes approved by the Second Vatican Council. Out went the Gothic altar; in came a plain wooden table. Out went the pews; in came chairs that could be rearranged as wanted. Out went Gregorian chant; in came guitar Masses.

Within a few years, St. William became one of the most popular churches in the city, drawing people from around the archdiocese and even from Indiana, across the Ohio River.

For O’Connor, St. William being a Vatican II parish meant more than full and active participation in the liturgy. Sitting around the rectory table, parish leaders discussed ways to address some of the social problems in the city. They started New Directions, a nonprofit corporation to buy abandoned houses, make them livable and rent them out at affordable prices. They turned an unused room into a ministry serving poor people who needed help managing their money and paying their bills.

In the 1980s, parishioners voted to become a sanctuary church, giving shelter to refugees from political repression in El Salvador and helping them find safety in Canada. They also connected with a Maryknoll missionary in Nicaragua and established a sister parish relationship with Catholics in the town of Esquipulas — a relationship that continues to this day.

With more parishes implementing the liturgical changes of Vatican II, Masses at St. William became less crowded. And with priests leaving to get married, the number of priests assigned to the parish got reduced to one. But as a non-geographical parish with lively liturgy and active social ministries, it continued to be self-sufficient with 200-300 households.

In 1990, Archbishop Thomas Kelly adapted to the priest shortage by appointing an active church member to be parochial administrator for the parish. With no priest in charge, community members became even more involved in sustaining the parish and creating new ministries. A store named Just Creations was opened to sell crafts made by artisans in the Global South, paying fair prices for what they produced, enabling them to live well.

The empty rectory was turned into a retreat center, and today CrossRoads Ministry offers inner-city immersions to hundreds of high school and college students every year.

Earlier this year, Archbishop Joseph Kurtz thought it was time for St. William to have a priest pastor again, like all the other parishes in the archdiocese. The only way for him to do this, however, was to assign a priest from another parish to do double duty as our pastor. This is not uncommon at a time when many dioceses have more parishes than priests.

Unfortunately, the priest that was named turned out to be a bad fit. Our lay parochial administrator keeps things running, but the parish’s major decisions are arrived at through discussion, deliberation and consensus. The new appointee had a more traditional mindset, according to which the pastor makes all the decisions. Rather than allow the differences to become a public confrontation, the archbishop wisely decided to allow us to continue as we have been.

We’ll see what happens next year. We had priest pastors for 20 years, but they were priests with a Vatican II vision and a willingness to be led by the Spirit. As you can see, that Spirit has led us into places where few parishes dare to venture.

St. William is one of the most successful parishes in Louisville. Everyone sings at Sunday Mass. Young professionals and families with children outnumber the gray heads so visible at many Catholic Masses. Even though we are a small parish, we give more than most large parishes to the poor and the needy through St. Vincent de Paul, Catholic Relief Services, our sister parish in Nicaragua, and local immigrant services. Being self-directed seems to make us more generous.

Perhaps it is time for us to be more than a local success story. Perhaps under the leadership of Pope Francis, it is time for a renewal of the renewal that began under the saintly Pope John XXIII. A lot can happen when the people of God are allowed to be God’s people and take responsibility for being church.

We are a living example of how the Catholic Church can move forward despite the priest shortage, despite the sex scandals and despite the Roman Curia. We are proof that the spirit of Vatican II is still alive and well.

At St. William, “We are the church” is more than a slogan. It’s the way we operate. And it is all allowable under canon law! We just need bishops who will recognize the immense possibilities of lay-led parishes.

[Joseph Martos is a theologian, a retired professor and a member of his parish for 27 years.]

(To read this article on its original page in NCR, click here.)