Can I Stay in the Catholic Church? by Brian Lennon SJ (2012) 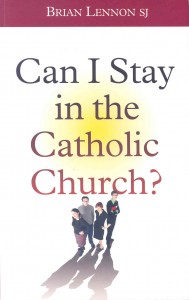 ‘Can I stay?’ is a question which many Catholics face in the light of the response of Church leaders to child abuse.  For Brian Lennon, a Jesuit priest, the question also arose because of doubts about faith which he, like others, experienced over many years.  The abuse crisis brought these to a head.

He suggests that the way in which leaders responded to the crisis is connected to the Church’s structures. These are characterised by patriarchy, lack of accountability, the absence of transparency, deference and the exclusion of lay people from authority.

Drawing on scripture and history he shows that structures were different in the past and can therefore change in the future.  For this to happen there is a need for a coherent, organised and focused campaign for justice and respect within as well as outside the Church – a campaign which eventually must lead to a new Ecumenical Council.

‘In this thought provoking book, which asks a question many may recognise, Brian Lennon journeys to an energising conclusion, which will challenge and engage the reader.’  Baroness Nuala O’Loan

About the Author
Brian Lennon SJ  has worked for over thirty years with people affected by conflict in Northern Ireland and elsewhere. His previous books include ‘So You Can’t Forgive? Moving Towards Freedom’ (Columba Press, 2009).