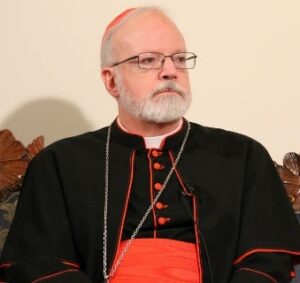 In what could be interpreted as blunt criticism of the Pope, Cardinal Sean O’Malley of Boston has declared that the accusation of ‘calumny’ made against Chilean survivors of abuse will be a cause of ‘great pain’ to them.

Survivors of sexual abuse committed by a high-profile Chilean priest have testified that some of this abuse was witnessed by Bishop Juan Barros Madrid before his appointment by the Pope to the Chilean diocese of Osorno.  The pope’s rejection of this testimony – in the face of unprecedented Chilean church unrest – appears to reverse the default policy of the church to give credence to survivor testimony unless there is clear contrary evidence.

In a statement published on the Boston diocesan website, Cardinal O’Malley declares:

‘Words that convey the message “if you cannot prove your claims then you will not be believed” abandon those who have suffered reprehensible criminal violations of their human dignity and relegate survivors to discredited exile.’

As Cardinal O’Malley is a key advisor of the pope it seems certain that we have not heard the last of this particular issue.  The cardinal also testifies in his statement to the sincerity of the pope’s abhorrence of clerical abuse, implying that this latest ‘calumny’ outburst is out-of-character.

This story adds to the apparent mystery of Pope Francis’s attitude to the problem of ensuring the accountability of bishops for their administrative handling of clerical abuse cases.  Irish survivor, Marie Collins, resigned from the pontifical abuse commission over this and related issues, and some commentators have speculated that the pope may be unable to remove roadblocks to reform.

On his flight back to Rome on Jan 21st, Pope Francis apologised for the pain he had caused Chilean victims of abuse by using the word ‘calumny’, but repeated his contention that the reported victim testimony to Bishop Barros’s knowledge of their abuse was not ‘proof’.  Reportedly, this has not mollified these victims.