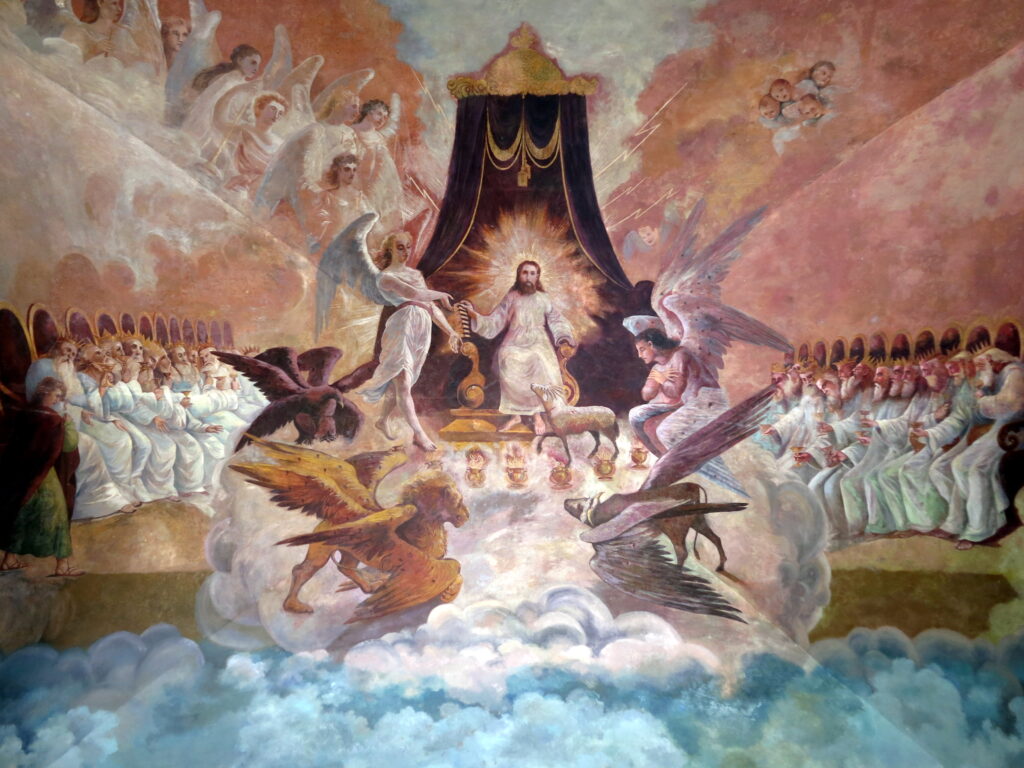 In commenting on an earlier feature – Why Parish? – Neil Bray asked ‘what do we mean by Catholic Community?’ Asked to consider giving us a new feature on that subject, Neil sent us what follows: a summary of, and reflection on the celestial as well as the earthly ‘people of God’.

In reality, the most complete concept of Catholic Community is The Communion of Saints – the blessed in Heaven, the faithful on earth and the souls in Purgatory.  The overall responsibility of this community is to satisfy God’s requirement to give glory and praise to his name.  The Sacrifice of the Mass is the event at which this community comes together in the most all-embracing fashion to realise this divine requirement.

These three constituent parts of the Catholic community differ from each other.  The “faithful on earth” dimension is the only one where giving praise and glory to God is an exercise laden with living in an internal battle between good and evil in a corruptible body with a fickle soul, in a world which despite all its obvious instances of goodness is still a corrupt world, also struggling with the battle between good and evil.  The balancing item of course is God’s providence and his absolute concern for the wellbeing of every aspect of every person’s life, including those whose existence is regarded as an affront to respectability.

So the Catholic community already exists.  It is a reality superseding cosmic dimensions.  On the level of the cosmic, the baptised Catholic is a member of an integrated, universal and divinely designed brotherhood/sisterhood and not just of a local, congregationalist community.  Catholic life has to be lived locally but the universal reality is a necessary concept for a more complete understanding of how the living is to be done.

Just as Abraham did not create the “great nation” neither can human beings invent and create the Catholic community.  Today believers are where they find themselves.  As far as life on this side of the grave is concerned the question is one of how to participate in the Catholic community, how to be a branch on the divine vine, in a manner that gives praise and glory to the name of God.  And in the current time, Catholics are told that this involves becoming missionaries.  But on what basis do they give witness?

Martin Buber writes about an adherent of the Enlightenment, a Jewish man who resisted the faith, visiting the Rabbi of Berditchev to shatter the latter’s proof of the truths of his faith.  After an initial utterance which startled the visitor (more of which below) the rabbi told him that the “great scholars of the Torah … were unable to lay God and his Kingdom on the table before you, and neither can I.”

No one can lay God and his kingdom on the table before another person; even the believer cannot do it for him/herself.  But does this rule out all plannability as part of the task of religion?  A brief reflection on the history of philosophy can be added here in terms of three phases thereof.

In medieval and more ancient times the dominant philosophy tended to consider all being as the product of the thought of God.  Human beings are created in the image and likeness of God and human reason derives from the thought of God which is truth and therefore has meaning.  Consequently, individuals can think through the meaning of being and find truth.  Philosophy made room for the metaphysical, for the eternal.

But philosophy later rejected the idea that the task of the human mind is to think about being, judging the human mind incapable of doing so.  It was claimed that all that can be known and understood is what human beings themselves have made.  Only questions related to matter, motion and time were deemed knowable.  The focus was not on eternity but on the past, on history.  Consequently, human beings were no longer in a position to look beyond themselves. But with the onset of Darwinism, they had to learn to accept themselves as merely a chance occurrence.

This could not suffice and needed to be allied to a second principle based on the future and on what human beings could create therein.  The idea was to be able to make themselves into whatever they wished themselves to be.  A newly created person was plannable.  There was no need to consider God as outside the range of plannability.

This is what modern philosophy attempts to “lay … on the table.”  It is reminiscent of an idea once put to Adam and Eve.

In effect, Catholicism unites the three phases into one.  The catalyst for this harmony is the gift of faith.  Catholics can benefit from the advances in knowledge in the areas of matter, motion and time and indeed to contribute to such.  Faith confers a  far more comprehensive enablement – to develop knowledge of God and contribute to its dissemination.  Furthermore Catholicism has always entertained the responsibility to change the world, but in a manner in accord with the thought of God.  Those who convert to Catholicism from within Catholicism itself and from without do so in the belief that Christ founded the Church to continue his work in earth of representing the thought of God to humanity.

The varied translations of Isaiah 7:9 (ESV – “If you are not firm in faith, you will not be firm at all”) indicate that faith in God appears as a holding on to God through which an individual gains a firm foothold for his/her life.  Faith means taking a stand trustfully on the ground of the word of God.  Essentially it is entrusting oneself to that which has not been made by oneself and never could be made and which precisely in this way supports and makes possible all human making.

In this context the following paraphrased from Fr James Schall is relevant.  The Catholic distinction, in short, is that it is a truth addressed to human reason.  It is a truth we did not give to ourselves, but one given to us as a gift, a gift of light.  Kingdoms rise and fall.  But the narrative of the importance of each individual remains the same in all regimes.  We are not mere mortals.  No lasting city is found among us.  All men die no matter how long they live.  And all are promised resurrection according to God’s graces and their choices of how they lived their lives.  All have been offered mercy and forgiveness, but not a free ride in which they will be all right no matter what they do.  The Catholic difference is that, in the end, no other difference counts.

If one considers how one should contribute to the Catholic community, one can think of umpteen different options along with prayer, the sacraments and the option for the poor.  Here just four will be considered.

Lastly when the Rabbi of Berditchev’s visitor entered the room, the rabbi delayed acknowledging his presence, then looked at him fleetingly and said “perhaps it is true after all.”  This simple utterance unsettled the visitor, and indeed, for that matter, perturbs all a-theists.  Fr Paddy Byrne has expressed the view on national radio that a-theism tends to lose its vigour at the approach of the hour of death.  Is it within the gift of the Catholic community to speed up the process?  Perhaps yes, depending on the responses of the individual Catholic when the proverbial “knock on the door” serves him/her with a discernible invitation to conversion or renewal or penance or action.