The Tyrone Guthrie Centre at Annaghmakerrig

Teresa Mee finds deep spirituality and companionship in an Irish community of artists and writers – and compares that with our typical celebration of Eucharist.

Life-giving Community could well characterise the Church we long to see arising from the ashes of its present disunity, corruption and crisis state. Actually, such Life-giving communities already exist, and I believe that one such is to be found in the Tyrone Guthrie Residential Workplace for Artists in Annamaghkerrig, County Monaghan.

Before going on to what it is that I experienced there as life-giving community, let me begin with my impressions of the place, as I arrived in Annaghmakerrig by taxi from Monaghan for the second time in thirteen years.

Rounding a curve along the road between open fields and past a herd of grazing cattle to the left, we drove through the double gateway to the 400-acre Annaghmakerrig estate. As we moved further along between the lawns bordering to our left a forested area and to our right and down the hill an extensive lake, two swans came into view, gliding gracefully across the water. Then further up the hill we arrived at the Big House, where ‘since 1981, thousands of artists from all disciplines and parts of the world have experienced the relaxed and convivial atmosphere which is both enjoyable and conducive to work’. 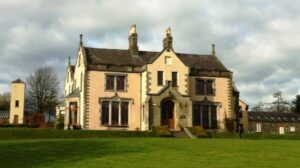 Welcomed at the door, and to my great surprise, recognised from my previous stay, I soon felt myself at one with those already in extended or, like myself, short-term residence. From the moment of my arrival I felt the power of the convivial atmosphere of this welcoming community of staff, and short and long term resident artists of all categories who seemed to have become a part of the hospitality tradition, an impression that would grow with familiarity.

Looking back now on those six days I spent enjoying the benefits of life giving, supportive community, I’m trying to surface the elements of what makes for this.

What comes to mind immediately is the quality of mutual service and sharing that goes on before, during and after the evening meal when thirteen people gather together in table fellowship.

This spirit of community is quickly caught, not only by long-term residents but also by those staying for only a week or a few days at a time. One can imagine how on-going mutually supportive friendships and service develop from this wonderful experience of table fellowship, communion.

Outside of meal times, the day is free, and busy in their rooms, few people are around, beyond those coming for quick pick-up lunch, and others arriving for or leaving after a short or long-term stay.

In the course of short walks or occasional breaks for coffee or self-service lunch, I was struck by the inner drive of highly motivated people. Mainly in the middle-aged and younger bracket, they are people with a substantial span of life experience to draw on, to realise the vision of their creative work. At the same time, they are interested in the work, achievements and life experiences of others.

This kind of interchange can also be especially supportive for people currently going through bereavement, or marriage breakdown, or even seeking inspiration and encouragement in their creative tasks in hand. I was amazed at the level of inner freedom some people enjoyed, so powerfully enabling self-criticism and the ability to recognise their own inner blockages, failures and setbacks in life, while keeping cheerful and afloat to address the challenges.

Leadership in service of the whole

The level of external control in the Centre is quite imperceptible, giving the impression that the place belongs to the artists, or rather that the artists and the management form one community.  I’ve been puzzling over the question of how such an institution can so flourish and endure in the absence of perceptible organisation, leadership and control.

But organisation, leadership and control, though imperceptible, are powerfully there, suited to and taking into account the profile and specific needs of the creative intuitive people.

Caroline Myss believes that ignoring our intuition leads us away from our life’s purpose and can cause serious damage to our spirit.

“We have an intuitive voice in us. We are born intuitive,” Myss says. “We are so intuitive that it’s actually for most people the source of their greatest suffering.

Following that voice and listening to your intuition allows you to evolve and push further toward your life’s purpose. “[Intuition is] the part that keeps us moving and turning the wheel of our life,” Caroline Myss says. “It will guide you.”

I’ve been puzzling over the question of how an Institution such as Annamaghkerrig can flourish and endure over time in the absence of perceptible organisation leadership and control. Yet Leadership though imperceptible is powerfully there in Annaghmakerrig, so how does it work, taking into account the profile and specific needs of its creative artist membership?

Self-esteem, mutual respect and Equality of dignity reign supreme with no scuffle for personal or group power and no perceptible hierarchy. Everyone is respected and listened to. There’s a sense of meaningfulness and of self-esteem in an atmosphere in which artists are just themselves. I think this has something to do with listening to the Spirit deep down within, source of inspiration.

But can such a life giving community exist as part of the Catholic Church? Well, hopefully as a community within an inclusive Church of the future in which, rich and poor, ‘Samaritans and sinners’ will all be welcomed for Eucharistic celebration around the table of the Lord, where no one is silenced and no one is alone invested with power to address and act on behalf of the assembled group. Leadership and organisation and control would be there, but imperceptibly.

In his book, You are the light: Rediscovering the Eastern Jesus, John Martin Sahajananda addresses the issue of the damage being done by over-control in the Church. ‘For two thousand years the keys of the kingdom of God that Jesus gave to Peter have been seen as the keys of power and authority, to loosen and to bind, to close and to open the gates of heaven. But in the third millennium, the keys .… will be seen as…the keys that liberate people from the prison of religion based on the law’.