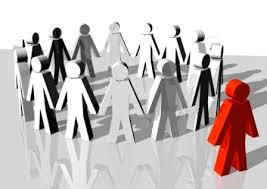 I’m not gay. I know that because I’ve never felt the remotest spark of sexual attraction towards another woman – whereas I can admit to having experienced that certain ‘electrical tingle’ towards the occasional member of the male sex throughout my life. (At this point, I feel I need to clarify that it’s JUST the  ‘tingle’ I’m talking about – please don’t think I’m some kind of sex fiend, taking follow-up action on multiple tingles. My husband can rest assured!) So I don’t know what it feels like to have grown up gay in a straight society – and not just a straight society, but a society which, I believe, still sees homosexuality as a perversion despite our claims to the contrary. I don’t know what it feels like to have discovered such a fundamental ‘otherness’ at some stage during my formative years and to have had to deal with it.

But I DO know what it feels like to be in situations where I’m on the outside – to feel that I’m not quite accepted, that I’m different, that I don’t belong. And I suspect that everyone reading this can recall such situations too.

The actual circumstances of such situations are not really important here, but I had one such experience recently and it has made me think about what it might be like to be on the outside in such a fundamental way as being gay in ‘Holy, Catholic Ireland’. In my recent situation, there’s a very real possibility that my feeling of being excluded was mainly in my own head, a residue from childhood, but the feelings were still real.

As someone who was sent away to boarding school from an early age, I have long felt a bit of an outsider in my home community. I was so shy as a teenager that I wasn’t able to be part of the local scene when I came home in the school holidays. I believed I was seen as ‘stand-offish’ because of this. I have long since moved away from my home place and , though I love it and often go home, I tend to spend my time with immediate family only when I visit. It’s been a long time since I had occasion to be in the company of the wider community for a social gathering. But I was at a party recently, a really good party, actually – one of those parties where the sense of familiarity and mutual affection among the guests is palpable. And I sensed (maybe wrongly) people didn’t feel comfortable with me.

I allowed myself to actually feel and follow what happened INSIDE me when I felt excluded. There was an aching loneliness – that kind of loneliness that you can only experience when you’re in the midst of a crowd – a feeling of pain and sadness that I wanted to escape from. It HURT. It hurt inside and I wanted it to stop hurting, so I turned it outside.  “How dare they make me feel like this! What have I done to make them reject me? They don’t even give me a chance to show that I’m a nice person!” And then I found myself BECOMING not very nice – it’s hard to explain, but I started shoring up my protective shell and retreating into a ‘Who needs them!’  mentality. I could feel myself withdrawing emotionally and deciding not even to try to be friendly and warm because I didn’t want to feel the pain of rejection again. Everything inside me wanted to escape and get back to familiar, comfortable, places where I felt that I was valued and accepted – to mix with only the people I knew liked me. I don’t mean to make a mountain out of a molehill here or to claim devastating agony. I’m well able to recover from such instances at this stage in my life -they don’t do any lasting damage to my self-esteem.

But the biggest thing I’ve realised is that I am compelled to protect myself against situations where I start to dislike MYSELF – where I’m experiencing my own negative, petty, small-minded, immature and even MEAN side. I have to find ways to get back to LIKING me. The most natural first step is to push the blame out onto the ‘other’ — those whose rejection of me have led to me feeling this dislike of myself. The more mature part of me can realise it’s just my shadow side asserting itself and that any negativity I’m feeling is simply down to my own insecurities – it says more about me than about anybody else!

But what if I found myself in situations where ‘the other’ really WAS hostile? What if I realised that, just because of my very nature, I was an outsider, that I was rejected, that I was regarded with disdain or disgust? How could I protect myself then?

I suppose I could deny my nature – I could refuse to acknowledge it, to myself as well as to the world at large. I could live my life in denial. It would make me very wary of people who might see through my self-denial and situations where I might have to confront that part of me that I refused to acknowledge. That would take an incredible amount of my mental and emotional energy and would likely cause me a lot of stress. It would affect all my relationships and make it almost impossible for me to love and be loved.

I could reject the society that is rejecting me. I could give it the two fingers by going over the top in behaviours that I’d know would cause offence to my ‘rejecters’. I could act in ways where I deliberately set out to offend those who rejected me. I could choose to go with the ‘mean and petty’ side of my nature. That would also affect all my relationships and make it almost impossible for me to love and be loved.

I could work to accept myself . I honestly feel ANYBODY who realises that s/he’s ‘different’ from the accepted norm has to work to acknowledge and accept that difference at some stage. I could come to a place where I was genuinely comfortable in my own skin, so comfortable that I didn’t have to hide or didn’t have to give the two fingers to society, but could just stand up and say: “This is who I am”. My God – what courage that would take! But it would be honest and true and would free me to love and be loved.

Because , fundamentally, I think I would be compelled to be with people in whose company I felt good about myself – people who accepted me. Otherwise I’d start being eaten up from the inside by the corrosion of self-hatred.

So back to being gay in Ireland. I found Panti Bliss’s ‘oration from the stage of the Abbey’ very powerful – and what was most powerful for me was when he repeated “And I hated myself for..” He obviously didn’t hate himself for being gay, but he hated himself for STILL feeling he had to hide it at times.

If we claim to be building a society based on love, if we acknowledge that the core of our religious/spiritual belief is that GOD IS LOVE and our lives are all about mirroring that love, then I don’t think anyone in our society should be made to ‘hate myself’ for simply being who s/he is.

I have to say “I AM homophobic” and I hate myself for being so (or at least I annoy myself for being so!). I AM homophobic because I have been so deeply indoctrinated that I DO judge people by their sexual orientation. And, what I mean by that is that when I know somebody to be gay, I view them through a different lens. I can’t help it. It’s there and I recognise that it’s there. I see the homosexuality before I see the person. In fact, every time I talk about ‘them’ as if ‘they’ are not ‘us’ I believe I am guilty of homophobia. I move very quickly away from that view now and I would hope that no gay person I meet would ever see that fleeting initial response, but I would be lying if I said it wasn’t there.

I am so proud of the younger members of my extended family – you know, those young people who have ‘rejected’ their good Catholic upbringing and embraced the wicked secular world – because they DON’T see the ‘them’ and ‘us’ when it comes to gay friends.

A friend recently remarked “But do they have to be so ‘out there’ with being gay? Do they have to be so ‘in your face’ about it?” And I understood exactly where he was coming from. That part of me that has to confront my own homophobia (maybe that’s too strong a word – maybe discomfort is more appropriate here) reacts in exactly the same way – “Okay! You’re gay! I have blue eyes! I don’t have to draw everybody’s attention to it all the time!” But nobody regards having blue eyes as something to be wary/disdainful of (at least I hope not!). I think the pendulum has to swing over to the side of homosexuality being ‘in your face’ before it can come back to the centre and be accepted as just being part of the rich tapestry of diversity among God’s children.

Do I see the ‘powers that be’ in the Catholic Church granting me my wishes anytime soon? The answer to that one is fairly obvious!

I can let my views be known. I can let my church leaders know how I, a member of the lay faithful, feel. And, maybe more importantly, I can let the gay community (and I’m not using ‘them’, when I say that – just ‘others of us’) know how I, a practising Catholic, feel.

But I would ask, with all gentleness and sincerity, that you ‘others of us’, understand how I, of more advanced years, still have to work to overcome that which is so deeply embedded in my psyche. Know that I WILL get to the stage where I accept you as naturally as I accept those of us who have brown eyes! And I want my church to do so too.