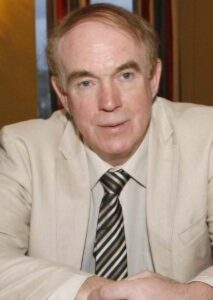 On Sunday Feb 6th, 2022 the death occurred, in Donegal, of Martin Ridge – the retired Garda detective who, with a colleague, investigated the prolific Catholic clerical abuser of boys in West Donegal in the closing decades of the 20th century, Eugene Greene.

Greene was subsequently convicted of serious charges in 2000, and given a twelve-year sentence. He died in 2018.

Deprived in those times of the resources needed to conduct such an investigation without a serious personal toll, Martin Ridge was permanently affected by the experience – and recounted the story in the 2008 book ‘Breaking the Silence‘.

Part of the burden Martin Ridge carried was the knowledge that some in Donegal mistakenly interpreted his work as hostile to the church – when it was in fact guided always by a deep Christian faith and sense of duty to innocent victims of gross injustice.

Speaking to the Donegal Daily newspaper in 2019, Martin Gallagher – one of Greene’s victims – declared:

“I no longer have any trust in the Catholic Church but I have my own faith and belief in God. I believe that Martin Ridge and his investigation stopped me from committing suicide and I owe him everything.”

In his homily at Martin Ridge’s funeral mass on February 8th, 2022, the main celebrant, an tAthair Brian Ó Fearraigh remarked:

“The hills and valleys, the sand dunes and sea shores of west Donegal might recall Detective Garda Martin Ridge, as he invited and listened to countless people and encouraged victims to share their story…as he appealed to hope, throughout those harrowing episodes of darkness and despair. When many others failed and even refused to act, even within the Church of Christ, who for too long, simply turned a complete blind eye, showing an abysmal and even cruel indifference for years. An Bleachtaire Mairtín Mac Con Iomaire always listened and acted, and became a beacon of hope, and support and encouragement and faith and freedom, not only to victims but also to their families, as he stood shoulder to shoulder with them, respected their life stories and experiences, and shone a light on a dark chapter of this community, our communities, county, and country’s shameful history. Mairtin Mhic Con Iomaire, who was brave, courageous and bold, even fearless in Breaking the Silence.”