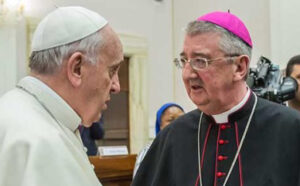 “Where some in the church are concerned, Archbishop Martin’s commitment and integrity on the abuse issue has meant that, from a clerical point of view, he will never be forgiven. For its part, Rome has only ever been lukewarm in its acknowledgement. To paraphrase Shakespeare: Martin did the job “not wisely, but too well”.

“It is imperative that whoever succeeds him as Archbishop …must be someone who has, at a minimum, a clean pair of hands personally on the abuse issue and be just as committed to the protection of children and to helping survivors.”

“The appointment will be made by the papal nuncio and Rome with little input from the current incumbent, as a clean break is the ambition. However in Rome it includes the very curia whose record in child protection does not shine, to say the least.”

For those with access, Patsy’s full judgement on the challenge facing Ireland’s premier diocese can be found here.