‘Don’t Weaponise the Eucharist’ – US Democrats to US Bishops 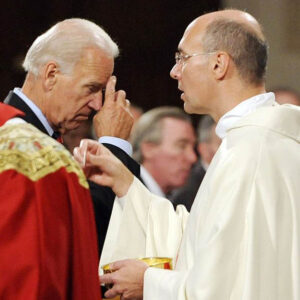 Sixty US Catholic Democrat members of the US House of Representatives have urged US Catholic bishops to avoid ‘weaponizing’ the Eucharist by denying it to politicians who are ‘pro-choice’ on abortion.

They include Alexandria Ocasio-Cortez, a New York lightning rod for the anger of the US Republican party – for her fiery opposition to former President Trump and support of immigrants and racial minorities.

The statement was made soon after US clerics voted in favour of drafting a document aimed at clarifying the rules to be applied for receiving Communion.  The move is believed likely to lead to the refusal of Communion to politicians who fail to follow the lead of US bishops on legalised abortion.

The 60 Congress members asked US bishops to note Pope Francis’s words in Evangelii Gaudium:  ‘The Joy of the Gospel,’: ‘… the Eucharist although it is the fullness of sacramental life, is not a prize for the perfect but a powerful medicine and nourishment for the weak.‘

For the full story in the US National Catholic Reporter, click here.

Elsewhere, in Crux, the veteran US Catholic commentator John Allen points out that whatever the eventual document may advise, it will be up to individual US bishops to set policy in their own dioceses.