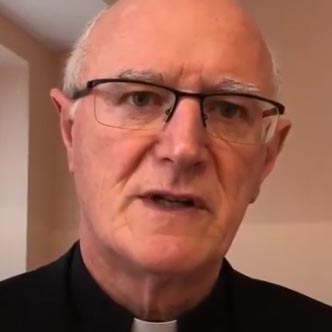 Dublin’s next archbishop – in succession to Archbishop Diarmuid Martin – is to be Bishop Dermot Farrell of Ossory.

Appointed Bishop of Ossory in 2018, Bishop Farrell has a long history of association with Maynooth College.

Born in County Westmeath, on 22 November 1954 Bishop Farrell was awarded a BSc in 1976 in mathematics and physics at St Patrick’s, Maynooth. Ordained in June 1980, he spent several years as a curate in Mullingar from 1981. In 1985 he went to Rome to complete a doctorate in Theology at the Pontifical Gregorian University, while serving on the staff of the Pontifical Irish College.

In 1993, Bishop Farrell was appointed Executive Assistant to the president of St Patrick’s, Maynooth. He later became vice-president and then president of the college. As president he made public in 2002 some of the facts concerning a former president of Maynooth, Micheál Ledwith – who had resigned prematurely in 1994 and later become associated with a new age cult linked with ‘Ramtha’s School of Enlightenment’.

According to Wikipedia Bishop Farrell is also a papal knight and became Grand Officer of the Order of the Holy Sepulchre in 2018 – but this is awaiting citation.

Archbishop Eamon Martin writes as follows re his colleague:

“Archbishop-elect Farrell’s priestly and episcopal ministry has been imbued with a deep understanding of theology and science together with a strong pastoral instinct and desire to fulfil the mission of the Gospel in both word and deed.  He brings a grounded spirituality, solid teaching and communication skills to his ministry. His previous significant contributions as president of Saint Patrick’s College, Maynooth, parish priest of Dunboyne & Kilbride, Vicar-General of the Diocese of Meath and National Director of the Permanent Diaconate have already provided him with a strong foundation for his ongoing episcopal leadership and ministry.”