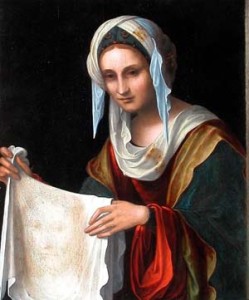 “Veronica .. Was there such a person? Unlikely. Her very name – True Image – Vera from the Latin, Icon from the Greek – suggests a fiction. …So… I placed her in the context of a family unit in Jerusalem at that time, then began to stir the ingredients!

“Her mother, Ruth, a good living, hard working jewess;  her father, Azarias, a cleric, legalist, member of the Sanhedrin;  her brother, Misach, possessed, who speaks not a coherent word right the way through the drama until the climax;  her suitor, Benjamin, an impulsive young man with leanings towards the Zealots;  and Sadoc, another member of the Sanhedrin who seeks to manipulate Azarias at an opportune moment…

“Fiction! All fiction! Names culled from the Old Testament!..”