Echoes of Ancient Rome – and of the England of Elizabeth I

Where is Science Fiction going Now?

Raised by Wolves
Raised by Wolves is an American science fiction drama television series created by Aaron Guzikowski that premiered on HBO Max on September 3, 2020. The first two episodes were directed by Ridley Scott, who also serves as an executive producer for the show. In September 2020, the series was renewed for a second season. It is available to those with Sky satellite and to TV Now customers.

Who should care about science fiction?’ I hear that complaint, but since I saw Forbidden Planet (1956) I have been hooked on the best of the genre.

Dealing as it sometimes does with the whole of the mystery of existence, science fiction can communicate both the desolation of a universe without God and the possibilities that emerge if there is one. It can even get around to wondering if Jesus of Nazareth was somehow connected to the source of everything that is.

Forbidden Planet was immediately recognised as a retelling of Shakespeare’s The Tempest and an exploration of the problem of evil.  It posed an important question: if anyone ever became so powerful as to be able to control everything that happened on Earth, what would ‘anyone’ do?

The James Bond movie franchise is predicated on the necessity of this planet being saved from some megalomaniac by the said James Bond – because he, after all, has nowhere else to go.

Forbidden Planet was bound by no such logic, for the story begins with the arrival of a space vehicle that insists on landing – to make use (in some kind of emergency) of the resources of a stranded archaeologist and his daughter on this forbidden planet.  Things look idyllic to start with but soon ‘go south’ – and in a spectacular way. The tension has to do with the uncertainty of anyone ever ‘getting out of there’.

In 1956 a monstrous mobile presence that had no time for anyone frightened the life out of me – simply because it was invisible until outlined by the entire blaster armoury of the human visitors.

In that movie I heard for the first time of the ‘id’ – for Sigmund Freud the instinctual part of our psychological makeup that we are born with. I also learned that the unrestrained ‘id’ can be deadly indeed. It was Shakespeare [at least in terms of the questions it posed] for the generations on the brink of actual ‘space travel’.  It was also raising vital questions about the deadly potential of ‘artificial intelligence’ – an issue still keeping lots of very bright people awake at night.  We still do not know whether humankind will succeed in saving itself from the monstrous ‘economy’ we have created.

Here I must not on my life dish out ‘spoilers’ – news of where ‘Raised by Wolves‘ is ‘going’ after episode one, but here are some intriguing components. 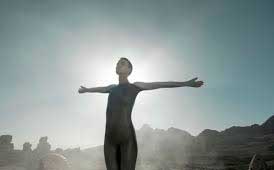 ‘Mother‘ in ‘Raised by Wolves’ – an android both nurturing and deadly – like a wolf!

This Catholic, at 78,  fully believes and relies upon the whole Creed (in so far as he understands it) – and cannot wait to see where ‘Raised by Wolves’ is going on a post-Pandemic planet Earth. As the series has already been renewed for a second season, and these things are designed to ‘run and run’, Guzikowski himself may well not know, as yet.