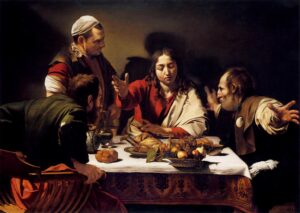 I’m finding it increasingly difficult to discover a relationship between the Mass as I experience it these days and the community celebration of Eucharist for which I long. 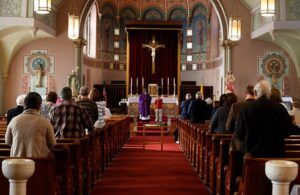 At the Mass as celebrated in Ireland today, in an average Dublin Parish Church, one occupies a place in a pew behind mostly elderly people. The arrangement of the congregation members in a series of pews, out of view of each other, does nothing to foster a sense of community celebrating together – let alone of communal sharing on the place and power of the word of God in our daily lives. We, for the most part, have come here to get/hear Mass celebrated on our behalf by a priest, to hear him read the prayers and scripture texts and to hear his point of view on what concerns our lives and our relationship with God.

There is little sense of communing, of community. We do not share actively through communing together on the word of God – nor for the most part do we share in the sacramental ‘breaking of bread’, the bread that is broken during the Mass. Both are exclusive to the priest up at the altar.

Sunday Mass in many parishes is not celebrated with congregational singing. The congregation remains passive throughout. People queue up in silence to receive communion at the altar rails. Then, after the two money collections to the accompaniment of parish notices, followed by the final prayer and blessing by the priest, the congregation members summarily leave for home to get on with the exigencies of life.

A Glimmer of Hope

To what extent, I ask myself, can I today experience Mass as a community celebration of Eucharist. To some extent I experience it where there’s a lively choir with community singing of Scripture-based hymns that challenge us to carry the Eucharistic experience into our daily living by:

In keeping with the readings during Sunday Mass in Rathmines Parish some years ago, this challenge was powerfully put to us by a young member of the choir in the Communion Reflection she read to us, which included:  ‘We appear to have no problem standing by and barely protesting at the massacres carried out in Syria on a grand scale every day. Isn’t it time we ourselves took a stand by joining organisations such as Pax Christi…… based in our own parish in the hope that each of us can make a difference……’….

The Recessional hymn with refrain, a powerful version of ‘Ite Missa Est’, was equally challenging to the community gathered in something close to Table Fellowship, with some of the congregation eventually joining in the refrain.  ‘When the last child cries For a crust of bread When the last man dies for just words he said When there’s shelter over the poorest head We shall be free.  When the last thing we notice Is the colour of skin And the first thing we look for Is the beauty within When the skies and the oceans are clean again Then we shall be free …….’

Both the reflection and the hymns suggest a form of getting in touch with our own reality, our failure at times to bridge the gap between what we profess and how we live. Mere choral recitation of ‘I have sinned most grievously in thought, word and deed’ sounds a bit empty by comparison.

One is reminded of the spectacle of so many young people variously exercising ministry including ministering to the homeless in the street; called and then sent, ‘Ite, missa est’.

The urgent need is to take steps towards securing the celebration of Eucharist lest we be deprived in the near future in face of the crisis of scarcity of priests. To ensure that we may develop as Eucharistic communities in Ireland calls for a much more radical approach than reinstating married priests, dispensing with compulsory celibacy and allowing women to become deacons. 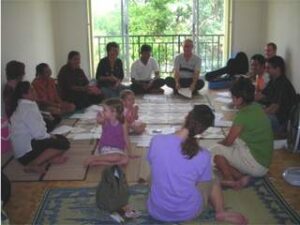 Surely the time has come for us to seek a more realistic solution by taking an honest look at how we celebrate Eucharist. It would involve going back to the tradition originating in the life of Jesus in which celebrating through table fellowship played such a major part – throughout his life, and up to the time of his ascension, as it did in the early Palestinian communities and as revived in some parts of the world today, notably Central and South America and parts of the far East.

In terms of interpreting the stories/accounts in the New Testament, someone once pointed to a Westerner’s as contrasted to an Orientalist’s way of receiving the message. If you tell a Westerner the story of the experience of Cleophas and companion on their way to Emmaus, you may be asked, ‘But did it really happen?’ However, if you tell an Oriental the same story, the response is more likely to be ‘Let me see now, what is the deeper meaning of that story?’. One could also ask ‘What difference would it make if one focussed on the meaning of the Resurrection accounts?’