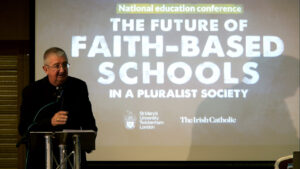 Archbishop Diarmuid Martin of Dublin, at a recent conference on faith-based schools

While the absence of teenagers and young people generally from our churches has been growing for more than a decade, there is no evidence that the Irish Catholic Bishops Conference has ever systematically researched the causes of this.  Why is this, when the departing Papal Nuncio, Archbishop Charles Brown, warned recently of an impending ‘cliff edge’ for the Irish church?

In this article, republished here with the permission of the editor of the Maynooth Catholic monthly, The Furrow, Sean O’Conaill offers a possible solution to the puzzle.

“Given what we know about the falling away in church attendance of teenagers, ongoing for over a decade – as well as the availability of our school-going teenagers for research that would probe the reasons for this – what research has been sponsored, or is currently projected, by the Irish Bishops’ Conference on this issue?”

This emailed query from me to the ‘Contact’ address of the Irish Catholic Bishops Conference on December 1st, 2016 had not received a response by the time of writing this (May 1st, 2017). That query was the culmination of efforts to trace evidence of consultable research, undertaken by the Irish Catholic educational establishment, into a phenomenon flagged up at the highest level at least as early as 2006. In that year the Irish Times reported that Archbishop Diarmuid Martin had recently told Pope Benedict XVI: “I can go to parishes on a Sunday where I find no person in the congregations between the ages of 16 and 36. None at all.” 1

I am not alone in my interest in this question. Also in 2006, the Catholic Iona Institute joined with the (Protestant) Evangelical Alliance to conduct a sample poll of young people, aimed at evaluating the state of basic Christian knowledge in this cohort. The results were summarised in an Irish Times report of April 2007, beginning: “Only 5 per cent, or one in 20, of 15 to 24 year-olds could quote the first of the 10 Commandments when interviewed for a new survey in Ireland. Almost one third (32 per cent) could not say where Jesus was born and more than one third (35 per cent) did not know what is celebrated at Easter.” Further down, David Quinn, director of the Iona Institute, was reported as calling for an examination of the reasons why knowledge of the faith was “in such sharp decline”2. 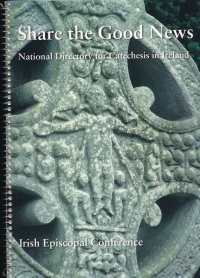 No news emerged subsequently of the fate of this appeal, but in 2011 the launch of Share the Good News – a new Catholic scheme for Catechetics in Ireland – suggested that Ireland’s bishops were not completely indifferent to David Quinn’s challenge. Announcing a pivotal shift in emphasis, this document declared that: “The model for all catechesis is the Rite of Christian Initiation of Adults … In fact, for the community of the Church, the catechesis of adults is the chief form of catechesis.” 3 (My italics.)

Envisioning as it does an ideal situation to be realised over a ten-year period, Share the Good News (2011) should six years later be shaping vibrant adult faith formation everywhere in Ireland. I see no sign of this in my north-western sphere, while the lapsing of school-going teens and the dwindling of parish congregations prevails widely. An urgent ‘wake up’ call to all adults is needed, but none so far has had urgency enough.

It follows that our church leadership is so far failing to confront, publicly and head-on, the challenges of faith formation in what is now a post-Christendom society. We are severely handicapped in facing those realities by recent failure to conduct basic research into the typical vicissitudes of Catholic faith in contemporary Ireland, beginning in secondary school. Given our investment in Catholic schooling and the crisis of continuity that now prevails – as well as the ready availability of our teenagers for such research – there is surely a mystery here. Why is it that publicly consultable research on this vital issue has not happened in this century, is not ongoing and is not, apparently, even yet projected?

In the absence of any other explanation I feel compelled to suggest the following. In a now highly sexualised and media-dominated culture, Irish Catholic educationists and other leaders are likely to have been advised by personal networks that puberty soon poses a radical challenge to pre-adolescent Catholic faith and practice in Ireland. They probably also have reason to believe that this challenge typically causes Irish teenagers to lose interest in a clerical church that seems obsessive about the minutiae of sexual relationships, deeply scandal-prone itself in that sphere, and increasingly unable to connect helpfully with their own most vital interests.

Just as an experienced barrister will know to avoid asking a question of a trial witness that could elicit an answer that would sabotage the barrister’s own cause, our Irish Catholic educational establishment is likely to be fearful to conduct research among Irish teenagers and young adults that could elicit public answers that would strengthen the secularist challenge to the very existence of Catholic schools – at the very moment when that challenge is most severe.

We appear to be in a bind therefore. We lack an authoritative body of data that could bring us to a wakeful consensus on the nature of the ongoing challenge to the continuity of Catholic tradition in Ireland – and we seem to fear to compile that data in case this would add another apparent scandal to the series we have recently suffered – the scandal of an ‘own-goal’ revelation that the Irish Catholic school system is not in most cases forming a faith that can withstand even the challenge of adolescence. 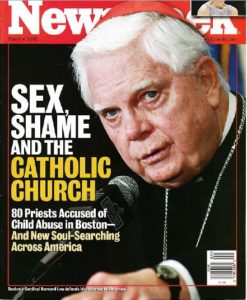 If I am right about this, there is a corollary that suggests a root source of this bind. Fearful of a powerful secularising media that now brokers honour and shame in Irish society, our bishops feel unable to be completely frank with their people about the true scale of the crisis of continuity we now face. Already deeply shamed by media, they are held captive to a debilitating extent by fear of even more media shaming.

I am not at all inclined to be dismissive of this concern. Far from seeing fear of shame as a specifically clerical, or even Irish, problem, I now see that problem everywhere in a range of contemporary global crises – and see only one way out for all of us: to realise that fear of shame is the central human challenge globally – not simply to morality but to life on earth.

Irish clerical fear of shame over:

North Irish fear of shame over:

A gathering global crisis in mental health, caused largely by:

If I am correct in interpreting this gathering global crisis as based centrally on fear of shame, it follows that there is no need for anyone to feel ‘got at’ if that analysis is applied also to themselves. Furthermore, it is far from clear that a global solution to this fear of shame can ever come from a secular politics – or from a secular media – bereft of any faith in a transcendent power. If there is no such power then we are doomed to dependence upon the good opinion of other humans for assurance of our own ‘success’ and ‘self-fulfillment’. If we believe that in the end our own value is dependent upon peer esteem, we are trapped in their good or bad opinion of us (potential or actual) without any possible means of escape other than winning some kind of ascendancy (the ‘zero-sum game’). 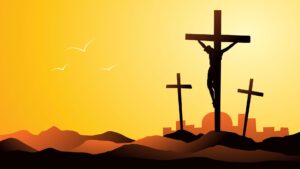 The overcoming of the world – of the power of shaming to hold us captive.

Christians especially have no reason to believe this – because the victory of the cross was essentially the complete victory of one person over fear of shame. Jesus called that victory ‘overcoming the world’. The fate of the world now arguably depends upon the spreading of that same conviction – that our value as individuals is not in the end ‘socially mediated’. It has to do with our relationship with a transcendent source of truth, the living Truth that has told us that our value is inviolable – and that the shaming of anyone is always a mistake. Pope Francis’ central message of Mercy is surely making exactly the same point.

My own experience tells me that teenagers lose interest in the church when they can no longer see its relevance. Yet, suffering also from fear of shame, we Irish Catholics are undergoing the experiential re-education that the church needs to become everywhere relevant again. Modern media determine that among everything else that is subject to globalisation, so are absurdist ‘celebrity’ on the one hand and disgrace on the other. This power of media of all kinds both entices and threatens all of us – and a secularism bent upon the control of media and the denial of any transcendent truth will offer inadequate recourse against it.

I therefore believe that until our clerical leaders can see their own likely fear of shame as merely a reflection of a pervasive human crisis, they will not be able passionately to preach the relevance of the Gospel to all generations – including our teenagers. If our faith has survived the traumas of the past two decades, it must have been somewhat purified also. It cannot any longer rest on the expectation that our church leaders will be paragons of virtue or wisdom. It follows that we can forgive them anything – because it is the Gospel for which they stand that nevertheless points to the ‘narrow door’ through which this earthly family may yet, God helping, save the Earth.

On the other hand, if my diagnosis of what prevents our bishops from researching the problems of teenage defection and of faith formation in Ireland is entirely mistaken, they need only explain the true reasons for that circumstance. The frankest dialogue on our central predicament can no longer be postponed – if adult ‘co-responsibility’ is truly on offer.