Faith formation? Take it out of schools altogether! 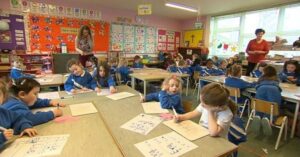 Sean O’Conaill argues that with the continuity of Catholic faith in Ireland now seriously in question – and with controversy growing over equal access to primary schooling for all – it is time to abandon school-centred Catholic faith formation as a catastrophic failure.

Why should we Catholics still suppose that a committed faith will be ‘formed’ by Catholic schooling from the age of four or five when it is staring us in the face that this rarely happens?

The virtually complete failure of that system was well summed up by Archbishop Diarmuid Martin of Dublin in 2006 when he told Pope Benedict:  “I can go to parishes on a Sunday where I find no person in the congregations between the ages of 16 and 36. None at all.”

As someone who spent a total of forty-eight years in Catholic schools, as student and teacher, and did not come to a deeply committed faith until the age of fifty-one, I am now convinced that abandonment of the delusion that schooling will form faith is an essential key to a revival of effective faith development in Ireland, at all ages.

To begin with, informed faith is not an outcome of instruction but of a combination of experience, questioning and insight – and school is not the most likely context for that required combination to occur.

Baptised in infancy, and raised in Catholic schools, the experience that brought me to a committed faith eventually was the realisation that as a teacher of history and current affairs – in a Catholic school – I could not connect the data of my own teaching expertise with the loss of faith of my own children.

“I don’t believe all this Jesus stuff,” said my youngest, aged fourteen in 1994.  “And most of my class don’t either.”

He was a third-year pupil in the same Catholic school.

Faith cannot develop properly in adults who opt out of responsibility for passing it on!

Until that moment I had never taken any serious responsibility for discussing ‘faith’ with my own children.  I had seen all that as the responsibility of the RE professionals and the clergy – and opted out.    My own focus was the growing secular crisis in Ireland – especially the crisis of violence, of inequality and of the environment – in Northern Ireland and in the wider world more generally.  I didn’t see, then, how the Gospels were in any way connected with that crisis.

I am now convinced that to leave that option open to Irish Catholic parents – of handing over  the role of addressing the questions, doubts and moral formation of our children to school professionals and to clergy – is to hobble the faith development of both adults and children – and to enable clergy generally to dodge the challenge of dialogue with adults.    Our school-centred system of ‘faith formation’ is a major factor in the growing crisis of Catholic faith in Ireland.

The reason is simple.  Even Catholic secondary schools have now been essentially  ‘secularised’ by the very weight of their vocational curriculum – and by the fashionable faith-averse or faith-indifferent formation of most of their teachers at third level.  Even Catholic teachers of History or English or Geography or Economics are taught to see faith development as the responsibility of someone else, while the expertise they have acquired at university has for many decades used a language that makes little or no contact with Christian faith or wisdom.

Even in Irish Catholic primary schools now there is news of eyebrow-raising in staff rooms at the arrival of more committed younger teachers.   Those teachers are struggling vainly, in all schools, against the tide.

And what of parents of teenagers concerned about the growing dangers that face their children in that rapidly changing world?  Too often they find that weekend homilies show no understanding whatsoever of the relevance of the Gospel to that world – so both they and their children stop coming to church.  Our retained reliance on the schools tells them it’s not their problem – or within their competence – to grapple with the faith formation of their children.  Our entire system says to parents  ‘don’t you worry’ when everything else tells them they must.

It was a profound mistake to ‘professionalise’ the faith formation of children and young adults in schools for the following reasons:

It would be a radical step to face parents and parishes now with the main responsibility for faith development – but doing that could be a complete game-changer for everyone, because:

It is time for a loud wake-up call to – and from – the leadership of the Irish Church:   our inherited faith formation system is failing and needs to be replaced by a system that allows no one to opt out.