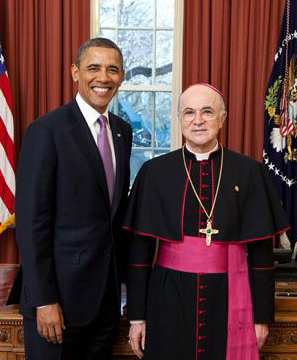 An avowed fascination with military force; an overwhelming need for attention; a gift for gulling the less discerning while lying from dawn to dusk; an extraordinary inability to empathise with those who suffer worst from bigotry, abuse of power and lack of health care; a complete lack of scruple in forwarding dangerous and often racist conspiracy theories; a total inability to absorb the basic principles of the constitution he has sworn to defend – these are the most obvious shortcomings of the present incumbent of the US presidential Oval Office, Donald Trump.

Yet in the month that saw his poll ratings plummet following a disastrous PR miscalculation, the same individual found himself lauded by an almost equally attention-greedy Catholic cleric, Archbishop Carlo Maria Viganò.

Author of a 2018 poison-pen attack on Pope Francis on the day the pope was to say Mass in Dublin’s Phoenix Park, Viganò on June 6th 2020 praised Trump’s militaristic rhetoric in condemning the mostly peaceful city protests that swept the US in the wake of the police killing of George Floyd in Minneapolis.

These protests were provoked by “deep state” operatives, according to Viganò – in defiance of copious evidence that they were in fact merely a legitimate expression of solidarity with all victims of racial oppression – and therefore entirely in line with Catholic social teaching.

In the midst of a global respiratory Pandemic with still unknown outcomes, we are by now accustomed to freakish occurrences but even so Archbishop Viganò’s leap onto the neo-fascist bandwagon set in motion by Trump in 2016 seems grotesque.  First time round, in the 1930s, Fascism attracted some early support from less discerning European Catholic bishops, but in the end that alignment worked out so badly for everyone, including the churches, that few could have predicted this latest development.

As Trump was soon also reprimanded for his plan to deploy US troops to suppress the constitutional rights of US citizens – by, for example, retired general and former US defence secretary Jim Mattis – and Trump’s poll ratings were meanwhile ‘tanking’  – why would anyone with a grain of sense want to align with Trump’s most obvious lunacies at this juncture?

Probably Viganò’s own predilection for conspiracy theories is part of the answer.  Seeking to tie the pope into an alleged but illusory ‘deep church’ plot to hide the homosexual genesis of the church’s clerical abuse disasters, it might seem logical to use Trumpian tactics to do that.  Viganò is also a ‘disruptor’, as ready to foment enmity within the church as Trump is to perpetuate and take advantage of adversarialism in  US politics.

Yet with US Catholic support for Trump falling rapidly – as scales fall from eyes – Viganò’s own naked ambition is too patently visible.  Thwarted in his clerical career by his own talent for conflict when based in the Vatican (the ‘vatileaks’ affair) his use of Trumpian ‘deep state’  rhetoric is now more likely to increase his own isolation.

Neo-fascism – exaggerated nationalism; the cult of a ‘leader’ who idealises violence; contempt for due legal process; deliberate exploitation of the human weakness for seeking scapegoats for one’s own anger – is in the process of being disowned even by the very US constituency that Viganò seeks to attach to himself.

For a Catholic to choose Trumpism in the wake of yet another lynching of an African American – in plain sight – is too obviously in total contrast to the central meaning of the Christian Creed.

Especially when it is recalled that Trump’s rise to political prominence began with a racist lie against the US president who welcomed Viganò’s arrival as papal nuncio in Washington in 2011 – Barak Obama.

Fascism was always both awful tragedy and grotesque farce.  In Archbishop Carlo Viganò’s latest leap of ambition the tragic farce of the campaign against Pope Francis is most starkly revealed.