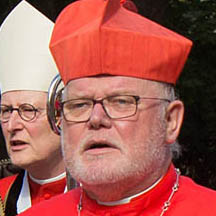 In rejecting the offered resignation of a close ally – Reinhard Marx, the Cardinal Archbishop of Munich, Germany – Pope Francis has called the world’s Catholic bishops to accept responsibility for failure to resolve the issue of clerical abuse.

Bishops should – he insists –  “feel that healing shame that opens the doors to the compassion and tenderness of the Lord who is always close to us.”

“Neither polls nor the power of institutions will save us. We will not be saved by the prestige of our Church, which tends to hide its sins; we will not be saved by the power of money or the opinion of the media (so often we are too dependent on them). We will be saved by opening the door to the only One who can [save us], and by confessing our nakedness: ‘I have sinned,’ ‘we have sinned…’ and by weeping, and stammering, as best we can, ‘Depart from me, for I am a sinner,’ – the legacy that the first Pope left to the Popes and Bishops of the Church.”

Drawing heavily upon the Gospel episode of St Peter’s shame in turning away from Jesus at his crucifixion, the pope has congratulated Cardinal Marx for his penitential gesture of May 21st and adjured him to remember Jesus’s subsequent forgiveness and the command ‘feed my sheep’.

The Reform Movement ‘Catholic Church Reform International‘ has also welcomed Cardinal Marx’s gesture – and sees the pope’s response as an endorsement of the Cardinal’s leadership of the reform wing of the German church on its ‘synodal path’.

“It’s hard to think of a pope giving a bishop a more resounding endorsement.”