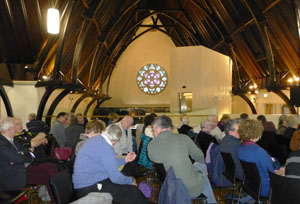 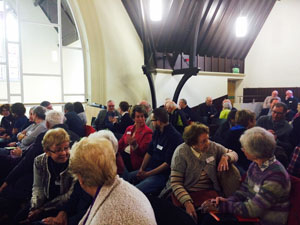 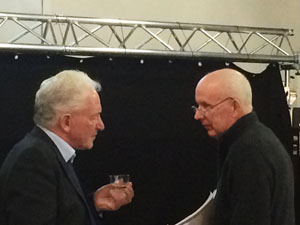 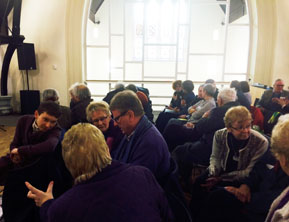 A beautifully restored old church building with its state of the art conference facilities, now the 174 Trust reconciliation centre, in itself reflecting the possibilities for church renewal and restoration, was the venue chosen for only the 2nd meeting hosted by the Association of Catholics in Ireland (ACI) in Belfast city.

Over 60 people from a wide variety of places, (including, Belfast, Bangor, Ballymoney,  Ballymena, Lisburn, Larne, Coleraine, Armagh, Carrickfergus, Donegal, Mayo and even as far off as New York and Cyprus), gathered to hear Redemptorist priest, Fr Tony Flannery speak on the topics of “The urgent reforms needed in the Catholic Church, and where Pope Francis stands on them” and “Reflections on the growth of the Catholic reform movement around the world; its strengths and weaknesses”.

Having commented on the rise of ‘listening exercises’ attempted by various diocese across the country, Fr Tony went on to speak on the crisis now coming sharply into focus in the Church across the country, namely the shortage of priests.  Commenting first on the inadequacies of the responses being made to the problem, he went on to outline the more radical suggestions made by the Association of Catholic Priests in Ireland (ACP), some of which could be implemented immediately and others which may need to be introduced over a longer period of time.  He reminded us of the invitation Pope Francis gave over a year ago to the bishops of Latin America, to come up with imaginative proposals to tackle the problem and present them to him.  The public nature of the invitation Fr Tony felt, made it an invitation to the Church worldwide.  The Irish hierarchy he said, “if able to act coherently, could bring about enormous and significant change in the Irish Church.”  However solutions such as the introduction of a strictly male only permanent diaconate, “after all the problems of clericalism, and after Pope Francis condemning the whole culture of clericalism over and over again”, fell well short of what was required.  “The last thing we need” he said “is yet another layer of male clerics”.

Turning to Pope Francis, Fr Tony recognised that after two years in office, it was clear that the new Pope was not going to change doctrine or deal with any of the hot button issues such as the ordination of women, etc.  But what he was doing, was attempting to change structures and the way the Church does its business and makes its decisions.  This is seen  in the way the current Synod on the Family is being conducted in comparison to all previous Synods of Bishops under the previous two papacies.  Since Vatican Two, only one previous Synod had the Bishops writing the report (1971), but in this recent synod Pope Francis is not only giving the Bishops freedom to speak their views but is also attempting to include voices of those on the periphery, albeit by a very cumbersome and unuser-friendly consultation process.  This has so far resulted in a report that although not earth shattering, is very different to anything produced before by the bishops.

The question he left us with however is, will Pope Francis get these new processes so embedded in the life of the Church that they will continue after his time?  It is recognised that there has been rapid progress in tackling the financial corruption in the Vatican, but other reforms requested by the cardinals – such as the reform of the Vatican curia which attained far too much power and were treating the bishops around the world like children – these reforms are proving to be worryingly slow.  Although he himself is not as pessimistic as others, Fr Tony admits the jury is still out as to whether Pope Francis can achieve real concrete reform before his time in office runs out.

In the afternoon Fr Tony gave an account of his experiences of Catholic reform movements internationally, especially in the United States.  They covered a wide spectrum of emphasis and membership, and reflected the particular cultures of those places.  He was especially impressed by the level of education of reform-minded Catholics in the US.

The day included some very honest discussion and opinion from the floor, fulfilling the ACI goal of providing a forum where people can know their own mind and find their own voice.