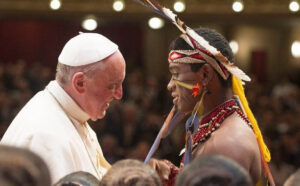 With the bulk of the world’s practising Catholics now in the global south – Africa, Asia and Latin America – and the youth of the global north tending to drift away, Catholicism is becoming ‘polycentric’ – and is also under serious challenge.

This is the conclusion of a survey by the Jesuit Thomas P Rausch SJ, in Civiltà Cattolica, the Vatican magazine, June 7th 2021.

Another wake-up call to northern hemisphere Catholics, the report stresses the weakening condition of the church in Europe and North America – especially in the declining number of clergy and an accelerating loss of interest among younger generations.

On the USA Fr Rausch reports:

“Fully 36 percent of Millennials (those between the ages of 18 and 24), are disconnected from any religious tradition. They are often called “nones,” for their negative response to questions about their religious affiliation.”

“In 12 of 22 European countries … over half of young adults claim not to identify with any particular religion or denomination.”

With the European and US churches in decline, while southern hemisphere Catholicism is growing, the bulk of the world’s Catholic bishops are now also from the global south.

“By the time of the 1985 Extraordinary Synod of Bishops in Rome, 74 percent of the bishops came from countries other than Europe or North America, as do more than 70 percent of the world’s Catholics today.”

The fact that Pope Francis is the first pope from the southern hemisphere is obviously a factor in his ‘polycentric’ view of the church – i.e. his stress on the importance of national and regional bishops’ conferences – such as that of the bishops of the Amazon region in 2019. Vatican II may well have been the last general Church Council to be dominated by bishops originating in the global north.

For the complete article by Thomas Rausch SJ in Civilità Cattolica, click here.