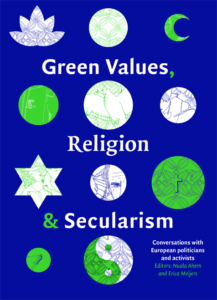 This book was for me an indispensable and fascinating – and yet a frustrating read. Exploring the potential of ‘religion’ both to hamper and to assist the ‘Green’ as well as the progressive ‘left’ projects, Nuala Ahern and Erica Meijers interviewed sixteen activists from a wide European spectrum of political and faith backgrounds. Convinced that ‘religion has positive potential to advance the ecological agenda’ the editors encountered nevertheless many misgivings among their interviewees. Inter-religious violence, anti-feminism, lingering sectarian animosity, sexual fixation and repression, support for the political right – even opposition to green politics as a competing ‘religion’ – all of these are to be found in ‘religious’ attitudes somewhere across the continent. So, of course, can be found the call to reflection, self-denial, and simplicity of life – but many of these interviewees admit to finding ‘religion’ on balance a dangerous force, unless it is ‘confined to the private sphere’.

So, the editors record:

“In the Green Common Manifesto for the European Elections of 2014, the word ‘religion’ is mentioned only once, as a ground for discrimination that the Greens do not accept. Islam and Christianity are not mentioned, neither are other religions. This silence might have to do with the fact that most Greens do not see any direct line between political opinions and religious texts and other sources. This ‘neutrality’ comes from the conviction that everybody can join the Greens, as long he or she supports Green ideas. In this way, religion is in fact regarded as a private matter. It is exactly this attitude we want to challenge.”

It becomes clear soon enough that a key problem is that of defining ‘religion’ – and indeed no sharp agreed definition emerges from this book to clarify the supposedly hard conceptual frontier between ‘religious’ and ‘secular’. Academia is no nearer a consensus, so inevitably a question arises as to the viability of a binary (i.e. mutually exclusive) understanding of those two constructs. If ‘secularism’ also embraces ‘free-market capitalism’ and ‘globalism’, for example, can we be sure that ‘secularism’ is more helpful to the Green cause than ‘religion’ – and if ‘environmentalism’ can be called a ‘religion’ (on the grounds of the binding fervour and activism it can evoke) why should fervent ‘secularism’ itself be disqualified?

Two Irish interviewees – Mary White and John Barry – throw interesting light on the balance of positive and negative for the Green cause in ‘religion’ in Ireland. Mary White, member of the Green party as well as a practising Catholic, observes that: “The church has seemed to focus intently on sexuality in a negative way, and people react against this and forget that Catholic social teaching has also been very positive in Irish society, tempering capitalism and consumerism in a benign way and providing great examples of practical charity and care.” John Barry, Marxist academic and Green / Leftist activist in NI, declares: “It is sad to see the energy that religion can mobilise being corralled into narrow issues such as abortion and gay marriage, issues of sexuality. We should concentrate on suffering and poverty. Christianity to me is about suffering and injustice, not gay marriage. Where are you going to put your energy, on gay marriage or childhood poverty?”

So I was forced to think hard by this short book, and led to strong agreement with the cause of its editors – of forwarding a synergy between a tolerant Green / social justice ‘secularism’ that can provide an open space for all traditional religious cultures to meet, and that core of social progressivism and compassion – and of love of the natural world – to be found somewhere in all of the ancient religious traditions.

This takes me to that aspect of the book that caused me most surprise. Reading it as a text file on my PC I was able to search immediately for two key terms that I expected to find at least once: ‘Girard’ and ‘mimetic desire’. Their complete absence startled me. True enough, the American-French academic René Girard ( d. 2015) is better known for his analysis of the relationship between religion and violence – but his work is equally important for an understanding of what could be called ‘environmental violence’, not only for an understanding of the potential of enlightened religion to reinvigorate the Green cause, but to counter the repressive and even violent tendencies of the religious right, and to end the reservations of ‘Green’ politics about ‘religion and the environment’.

Girard’s central contention is that the human tendency to elevate every ‘want’ into a ‘need’ derives from our tendency to source our driving desires in the desire of a rival – i.e. someone whom we admire and seek to emulate. This ‘model’ can be a close friend or colleague or sibling – or a remote ‘celebrity’ or corporate rival – anyone who seems to us to possess a higher status (or ‘being’). He argues that if the object of this ‘mimetic’ (unconsciously imitative) desire cannot be shared or cloned, contestation and conflict are very likely to follow.

The Girardian academic colloquium also argues that this pervasive human trait explains all fashionable consumer contagion – what we tend to call ‘consumerism’. It also explains all rivalry for power and status in organisations, and therefore the inward-focus of those who tend to control the planet’s political and economic order. We humans suffer from what the philosopher Alain DeBotton has called ‘status anxiety’ – ‘a congenital uncertainty as to our own value’. Until this trait has caused us life-complications that force us to draw it to consciousness and resistance, it will inevitably determine our driving desires. The advertising industry thrives on exploiting it – and ‘disruptive’ entrepreneurs are now in constant search of the ‘must have’ consumer innovations of tomorrow. Not only are globally ambitious commercial enterprises caught in this mimetic contest, so too are states – especially for control of key military and economic ‘assets’. None of the ‘systems’ that need to change if global disaster is to be averted are impervious to mimetic diagnosis. (Even the adherence of most UK politicians to the Trident submarine nuclear weapons programme is driven by the desire to emulate those other powers that possess these same weapons.  Abandoning Trident would ‘look weak’, so ‘what the world thinks’ determines all.)

It follows that Girardian analysis provides a vital key to the understanding of what seem to me to be the two major factors in the environmental crisis – rampant consumerism on the part of individuals, and distracted inertia on the part of those powerful commercial and political systems that also need to change.

What makes all of this so relevant to the cause embraced by Nuala Ahern and Erica Meijers is that Girard has argued convincingly that his understanding of ‘mimetic desire’ is reflected in the biblical concept of covetousness – twice warned against in the Decalogue and associated in each case, pointedly, with envy of a neighbour. Further, he interprets the tendency of biblical revelation as directed towards exposing the connection between mimetic desire / covetousness and all violence – including the scapegoating violence that becomes such a central theme of the New Testament.

Straight away fairly obvious objections arise. First, since ‘covetousness’ was a taboo for all of the Abrahamic traditions (Judaism, Christianity and Islam), why do none of them seem to associate it with the ‘mimetic desire’ that media have made so pervasive, or with the rivalries indulged in even by religious leaders and Christian kings for centuries?

The answer to both questions may well lie in, on the one hand the tendency of all desire to arise subconsciously (to begin with), and on the other the vulnerability of all religious leaders to the human need for physical security in what has always been a dangerous world. The almost universal tendency of Christian missionaries to seek first of all the patronage of the existing political and social order – as happened, for example, in Ireland and Carolingian France – made it obviously unwise to subject the rulers of those political structures to a minute examination of mimetic desire / covetousness in forming and maintaining them.

Islam seems to be subject to a different blindness – that which follows from a clerical preoccupation with, or possession of, political power. To make Sharia law a zealous obligation can also be to draw a veil over the mimetic political ambition of those who try to evoke ‘Islamism’.

Furthermore, there was always for all clerics a far safer object of moral concern: human sexuality. Snobbery (aka ‘status anxiety’ and ‘social aspiration’) was never indicted from the pulpit in Ireland – even though we can now see how it led to the abuses of the state institutions for the poorest and weakest that we now lament.  This ‘beam in the eye’ was unobserved, due surely to the obsessive focus on sexual rigour that has so characterised Irish Catholicism for so long. That mistaken association of evil primarily with sexuality determined even the rule of clerical celibacy, and this characteristic of the Irish Catholic Church did much to shape the moral preoccupation of the more rigorous faithful as well. We need look no further for an explanation of the muted reception so far in Ireland for the papal environmental encyclical, Laudato Si.

It follows that nothing could be more timely in Ireland than the discovery of Girardian analysis by, on the one hand, all those concerned to advance the most progressive causes (including ecology) and on the other, all those seeking ‘relevance’ for the churches. We should now be discussing this across the frontiers that divide, unnecessarily, secular idealism on the one hand, and spiritual idealism on the other.

I am deeply grateful for this book and for the all-too-brief opportunity to discuss it provided by its authors, and John Barry, at a debate in QUB, Belfast on July 9th 2016. We all do indeed need a hopeful green/social justice/spiritual alliance on issues of social injustice and ecology – to challenge especially the political gloom and inertia that now threatens all of us – and this book is an indispensable guide to the barriers to that.