Catholic Oxymorons: A Disgrace to the Church 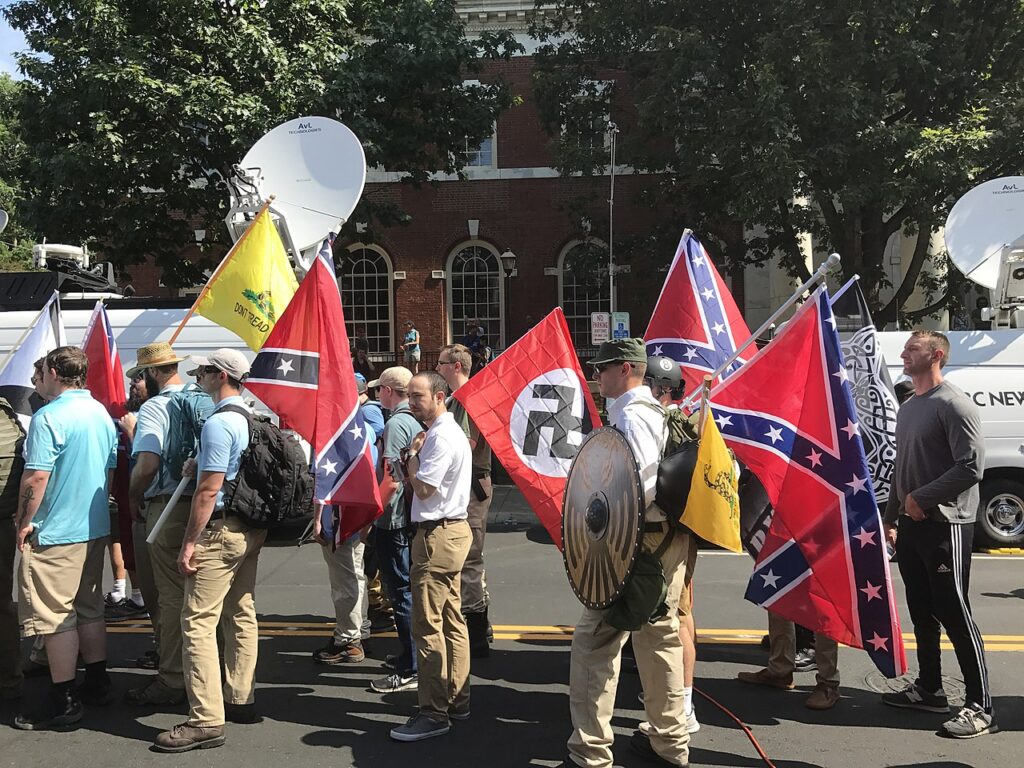 As the word ‘Catholic’ means ‘universal’ – i.e. for all – and many Catholic saints have died in bringing the faith to all nations – how have some people who identify as Catholic come to believe that Catholicism is compatible with white racial supremacism and even with extreme neo-Nazi movements that aim to provoke a global race war?
‘Once persecuted by the Ku Klux Klan, some Catholics now embrace the most extreme forms of racial hatred.’
This was the heading summary of an article that appeared in Sojourners magazine in July 2020, the online outlet of an inter-Christian politically-oriented community based in Washington DC, USA.
Written by an anti-war Catholic activist and scholar, Eric Martin, the article’s original title ‘Harboring a Culture of Hate‘ proved too much for some prominent US Catholics and has been replaced by ‘The Catholic Church Has a Visible White-Power Faction‘ .
This change  – and Martin’s disturbing detailing of this ‘visible faction’ of Catholic white supremacists – raises some serious and obvious questions: especially why it appears to be unexceptional for white supremacists to claim a Catholic denominational identity.
Among Eric Martin’s findings:

Given that the US bishops’ 2018 anti-racism pastoral letter – ‘Open Wide Our Hearts‘ – declared that racial hatred ‘has no place in the Christian heart’ – and that racism is also clearly ‘anti-life’ in spirit and intent, the open claiming by some of a Catholic rationale for the murderous bigotry of white supremacism is both absurd and scandalous. At a time when the USA is close to the tipping point sought by the worst racist bigots – that of a rapid descent into uncontrollable inter-racial violence – the absence of a far more pointed denunciation of ‘Catholic’ white supremacism led Eric Martin to call that a ‘harboring’ of this malignancy in his initial version of the Sojourners article. If that is not fair or accurate, how are US bishops finally to make clear that the church is not a safe harbour for those who, according to the bishops 2018 pastoral, are not Christian either?
‘Dry rain’, ‘loyal treason’, ‘apathetic enthusiasm’ – these are all oxymorons – word combinations that are so self-contradictory as to be meaningless. ‘Catholic white supremacism’ is therefore also an oxymoron – and so are ‘Christian hate group’ and ‘Christian white nationalism’. The overt racism that flourished as a global blight in the wake of the election of Donald trump in 2016 is one of the greatest global threats to world harmony and to an acceptable future for the world’s children.  As a virus that has already caught hold of too many who call themselves ‘Catholic’ it needs to be identified for what it is – naked racist imperialism – totally repugnant to the Gospel and the Lord who calls us to love the entire human family equally.

It is far from clear that the enemies of Pope Francis have separated themselves convincingly from this malignancy.  In the wake of the police killing of George Floyd in the summer of 2020, Archbishop Carlo Vigano’s identification of the Black Lives Matter movement with the apocryphal ‘deep state’ that is allegedly satanically opposing President Trump, is deeply disturbing.  It would follow naturally that Vigano was far from hostile to the Charlottsville neo-Nazi demonstration of 2017 and the ‘very fine people’ bent on atrocity who are detailed above.

Covid-19 is benign in comparison to white supremacism. By way of the vicious hatred it engenders, racism destroys the soul.
Sean O’Conaill, 24th August 2020