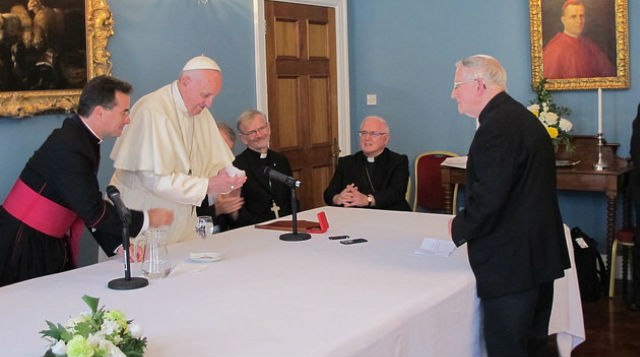 “Every morning for 40 years, after morning prayer, I recite the prayer of St. Thomas More, asking for a sense of humour. It seems the Lord has given it to me!”

So answered Pope Francis when asked by Irish Jesuit Fr John Callanan: “But how do you manage to keep your heart happy with all that is happening to you?”  The occasion was the pope’s private meeting with Irish Jesuits on August 25th, 2018 – immediately following his meeting with eight Irish victims of abuse by clergy.

The question could not have been better timed: on that same day the pope had come in for bitter public criticism from a former papal nuncio to the USA, Archbishop Carlo Viganó.

Clericalism was nevertheless again a prime target of the pope’s attention at this meeting:

“There is something I have understood with great clarity: this drama of abuse, especially when it is widespread and gives great scandal – think of Chile, here in Ireland or in the United States – has behind it a Church that is elitist and clericalist, an inability to be near to the people of God. Elitism, clericalism fosters every form of abuse. And sexual abuse is not the first. The first abuse is of power and conscience. I ask you to help with this. Courage! Be courageous! I really was unable to believe the stories that I have seen well documented. I heard them now in the other room and was deeply upset. This is a special mission for you: clean this up, change consciences, do not be afraid to call things by their name.”

By ‘the other room’ Pope Francis apparently meant the room in the papal nunciature in Dublin in which he had just met the eight survivors of abuse by Catholic clergy and religious.

Grant me, O Lord, good digestion, and also something to digest.
Grant me a healthy body, and the necessary good humor to maintain it.
Grant me a simple soul that knows to treasure all that is good
and that doesn’t frighten easily at the sight of evil,
but rather finds the means to put things back in their place.
Give me a soul that knows not boredom, grumblings, sighs and laments,
nor excess of stress, because of that obstructing thing called “I.”
Grant me, O Lord, a sense of good humour.
Allow me the grace to be able to take a joke, to discover in life a bit of joy,
and to be able to share it with others.