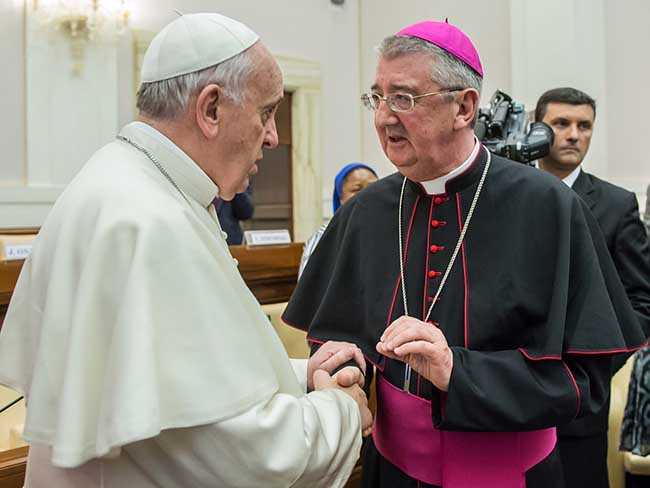 Archbishop Diarmuid Martin meets with Pope Francis in Rome in 2014

Both RTE and the Irish Catholic are reporting (13th January, 2017) that the Irish Catholic Bishops Conference (ICBC) has been unable to agree to bring proposals on ending the celibacy requirement for priestly ministry in Ireland to Pope Francis for their Ad Limina visit to Rome, beginning January 15th, 2017.

A proposal that Irish priests who have left ministry to marry be readmitted to ministry was brought by Bishop Leo O’Reilly of Kilmore diocese to his fellow Irish bishops in 2015.  According to the report in the Irish Catholic, the ICBC failed to reach consensus then on this proposal.

Nevertheless, according to Bishop O’Reilly, the issue may come up in discussions in Rome, as the proposal was included in the Kilmore diocesan pastoral plan that he had submitted to Rome in preparation for the Ad Limina visit.

That visit will last from January 15th to January 25th, and will probably have a packed agenda as Pope Francis is scheduled to visit Dublin for the World Meeting of Families (WMOF) in August 2018.

The looming Irish crisis of priestly manpower is part of a wider crisis of continuity facing the Irish Catholic Church – following decades of inadequate communication between clergy and people after 1968, climaxing with a series of scandals involving clergy in numerous dioceses from 1992.

It is to be hoped that Irish bishops will also discuss with the pope how to establish a more dynamic relationship with their people – to address a generational loss of interest in Catholic religious practice, the root of the crisis of priestly manpower. While the Irish church has been paralysed by clerical fear of dialogue for most of the period after Vatican II (1962-65), Ireland has become radically secularised in the same period – and the recovery of the Irish church will be delayed if maximum advantage is not taken of the window of opportunity for renewal that presents itself with this papacy.