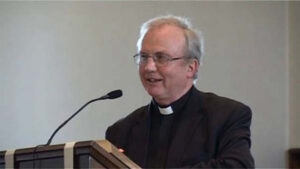 Bishop Donal McKeown, Bishop of Derry and chair of the Commission for Pastoral Renewal and Adult Faith Development of the Irish Catholic Bishops’ Conference

The Irish Church of the recent past was never the promised land – according to Bishop Donal McKeown of Derry.  The Irish Church is now ‘on Exodus’ – a pilgrim and missionary people journeying towards co-responsibility and the discovery of our own distinct identity within a united global church.

It is good to be able to welcome you here on this day when we celebrate the eve of the birthday of Saint John the Baptist – who suffered for speaking the uncomfortable truth to powerful people – and are aware of the UK poll on membership of the European Union. As people of faith from across our continent, you represent diverse languages and cultures which do not have one currency but do share one Lord, one faith, one baptism, and which espouse a European homeland that breathes with two lungs. We welcome you as representing the Church incarnate in your countries.

We welcome you to Ireland. The Church in this country is changing from a body that felt safe and secure in our own perceived strength. We are discovering the breath of the Spirit that invites us to be pilgrims and missionaries, not settlers and defenders of our castle, where we risked believing God has taken up permanent abode. We are a people on Exodus. We will be provided with watering holes on the way – and we are told not to hanker after the past. That past may have had its strengths but it was never the Promised Land. Being a pilgrim people is supposed to be the norm for us, not a punishment or an aberration. As Timothy Radcliffe memorably said, “The only thing I know about the future of the Church is that it has a future!”

You may think of Ireland as being on the edge of Europe, with the next parish being in Boston or New York. But Ireland and its Church have always been European. The Gospel came to us from the mainland of Europe. We sent many missionaries there such as Kilian, Columbanus, Fergal and Coloman. They came to a Europe where none of our present countries existed. The English invasion of Ireland in the 16th century was motivated by a fear of Spain. In the 18th century, Irish priests were formed in many colleges in France, Belgium, Spain and Italy. After a century of persecution, the 19th century Church took the French and Italian Church as its model for renewal. The 1916 uprising had strong encouragement from Germany. Irish people are to be found in all the great European pilgrimage centres – Lourdes, Fatima, Rome, Medjugorje. The Irish Catholic Church has always been clear on its European identity and we welcome you as those whom we have known as brothers and sisters down through the centuries.

There are many opportunities and challenges for this continent and world in which we seek to witness. On the positive side, we have great traditions of faith, deeply rooted in our cultures, traditions and artistic heritage. In Ireland, we are discovering a renewed thirst to drink at the wellsprings that nourished our ancestors through all sorts of periods. A century ago, people stood on the cusp of a radical redrawing of the continent which saw the end of the Ottoman and Austro-Hungarian empires and the creation of many small states. One hundred years later, the fear of the invasion and attack is inducing many to build new walls and not bridges. We may be facing a period of renewed nationalism, as well as strident regionalism within some current states.

Our task is not just to keep alive the flame of faith in our secular societies but to engage with those societies, offering hope and being a witness to a Church that, ‘by its relationship with Christ is a credible sign or sacrament of intimate union with God and of the unity of all mankind’ (Lumen Gentium 1). Our individual churches are not just concerned with saving souls but also with saving Europe from its worst self-destructive inclinations.

And you gather with us, motivated by a shared awareness of many of the new trends in Catholic theology. You gather in ‘a spirituality of communion’ (Novo Millennio Ineunte, 43), called to be ‘builders of tomorrow’s European society, establishing it on a firm spiritual foundation’ (Ecclesia in Europa, 41). And you gather in a Church that is rediscovering an ecclesiology of collegiality and co-responsibility. Pope Francis is clear that the Church is not an absolute monarchical pyramid under the headship of the Pope, but rather a community of local churches each of which is the Body of Christ in their distinct environments – and together constitute the Universal Church. The challenge is always to balance somehow the need to maintain the unity of the whole church with equal regard for the distinctiveness of the local churches.

It is good for us that you are here. I hope that it will be good for you to be with us. We are all enriched when we share our faith journeys – and together we can give thanks for all that the Lord has done – and continues to do – for us.

* Bishop Donal McKeown is Bishop of Derry and chair of the Commission for Pastoral Renewal and Adult Faith Development of the Irish Catholic Bishops’ Conference.