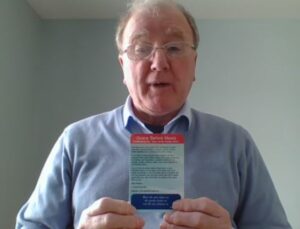 Gerald Donnelly, Clondalkin, Dublin – with the ‘Grace’ prayer card he offers to all

A call to Christian ‘mission’ is a call to ‘go out’ into the world – to spread a faith or practice of some kind – to strangers.

So how would you respond to a call to ‘mission’ in today’s Ireland? What questions might you ask – if you were even ready to entertain the idea? Would you be more likely to leap at the idea than to make objections and then change the subject?

In July 2017, out of the blue, ACI was contacted by Gerald Donnelly, based in Clondalkin, Dublin – just west of the M50 and not far from the Phoenix Park. He startled us with the story that he has been busy for some time in that very diverse and secularised locale – with a door-to-door mission to all families to pray ‘Grace’ together – no matter what their faith – when they meet for a meal. 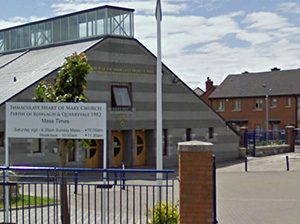 Fascinated, we asked Gerald how he had come to attempt this. He explained that he had grown up in Dublin in a large family, during challenging times. His own faith had come in stages, strengthened by these challenges. Volunteering to read at Mass he had been reminded in training that he would be reading ‘the word of God’ – and had then decided to read the Bible cover-to-cover. Encouraged by programmes of study found on EWTN he had then read books on Darwin, atheism and conflict.

As a result he had grown to accept the view of the church that since Creation is shared with everyone, and the Old Testament is shared with the three Abrahamic faiths “we have more than enough in common to overcome any differences between us”.

He goes on: “I needed to find some way to bring people together in a common cause. At that time I was asked to make up numbers for a group of senior citizens who were trying to get a dinner service started in their community centre. I noticed some people were quickly blessing themselves before they ate their dinner in an embarrassed kind of way. I was aware from conversations that all were practising Catholics and saw an opportunity to bring the group together through Grace before Meals. All accepted it, with the exception of a couple of begrudgers who made some difficulties – but we soldiered on. It is now an accepted practice in the group.

A Prayer Card for all?

“Later I approached leaders of the Atheist community and the Old Testament communities and the New Testament community in Clondalkin – and put three versions of Grace on the one card, plus a simple Children’s version which I promote door-to-door at no charge. (My daughter, Sandra, found that children’s version on the Internet.) This card  is well received at the doorstep, with one in three accepting it. 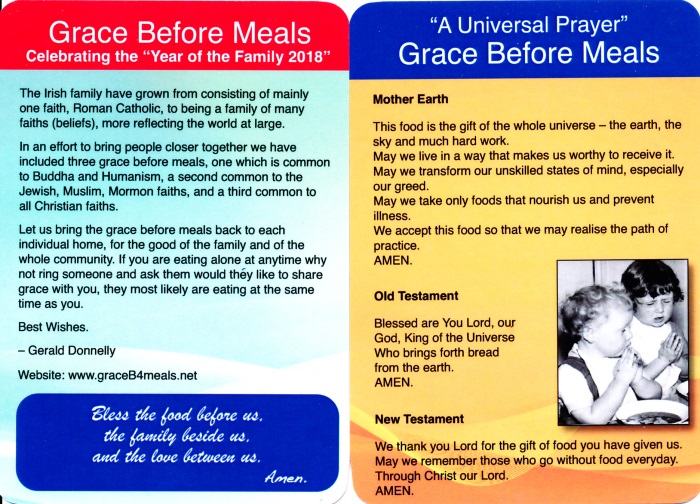 “It also gives me the opportunity to discuss beliefs with them which I think they rarely get the chance to do. They tell me about people belonging to them that are ill or have passed away – their falling from faith or their hostility to religion. This challenges my own faith daily which in turn strengthens me.

“Going door-to-door recently a man replied ‘I don’t believe in religion – it is the cause of all the trouble in the world.’ My instinct was to reply ‘that’s funny, that’s exactly what the believers would say about the “Godless People”’! I didn’t. I thanked him for his opinion which I respected, and for listening to me, and wished him a good day.

“It made me think. I had heard it many times before. It was the clarity of it and the conviction with which he said it that was different. He really believed what he was saying!

“He was partially right. There are people of ill will in every religion and there are people of good will who are “Godless” There are good and bad in all walks of life and if we ONLY concentrate on doing good every day this is acceptable to God and man.

“I believe we all need to be challenged daily to overcome our complacency. We need to re-examine the values we cherish and be able to share (sell) them in layman language, without biblical reference as all our ideals are based on reason also.”

It was partly this news of Gerald’s initiative that led us to begin this sequence of articles on ‘Irish Mission Now?’  What Gerald is doing may not be for everyone – but the theme of spreading harmony amidst the growing diversity of Irish society – and making space for discussion of faith – is surely part of what we should all be trying to do.

His response to the man who condemned all religion was surely exactly right also. Given the awful experiences of Catholicism that some unfortunate people in Ireland have had, the last thing any of us should do is to insist on the last word!

Do you have experience of broaching the subject of faith to strangers in Ireland today?  If you do, please contact us at info@acireland.ie , to tell us your story.