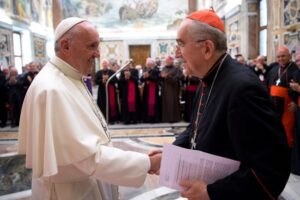 We lay Catholics have our own unique calling to transform the world, according to the pope.  We mustn’t see ourselves as ‘proxies’ or ‘delegates’ of bishops and clergy, says Pope Francis – as he forwards a shake-up of two Vatican dicasteries in Rome.  Soon a new combined dicastery for family, laity and life will take over.

“Baptism makes each one of the lay faithful a missionary disciple of the Lord, salt of the earth, light of the world, and leaven that transforms reality from within,” said the Pope – at a function marking the demise of a separate dicastery for laity.

The Second Vatican Council’s mandate aimed to encourage the laity to be increasingly involved in the evangelizing mission of the Church, Pope Francis said, adding that this is not a “delegation” from the Church’s hierarchy.

Click here for the full Catholic News Agency report: ‘For Pope Francis, the Catholic laity can transform the world’