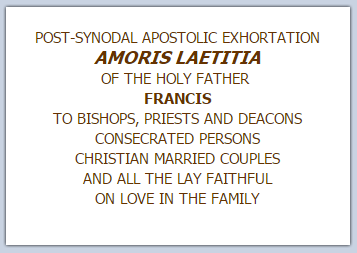 Does the hierarchical Church overuse Latin to overawe, divide and exclude?  Aidan Hart thinks so, and argues here for a change in the way Church documents are named.

Language can be used to unite or to separate people, to clarify or to obscure and hide, to create an ‘in’ group and an ‘out’ group, to create power for the few in the ‘in’ group – and powerlessness for the many in the ‘out’ group.

Specialist language can of course be meaningful and helpful to people of the same profession or trade. However it alienates most others and keeps them ignorant about what is being discussed in their presence or written about for their use – keeps them on the outside and feeling powerless. It says to the majority, “You are not one of us”, not part of the privileged ‘in’ group who are in the know and thus have rightful power in this particular domain over those in the ‘out’ group.

In all religions it is often used by the ‘in’ group of those in charge to the same effect, sometimes with the added purpose of creating a false sense of divine mystery around their words and actions. For the majority of people in the ‘out’ group much of it is just meaningless mumbo-jumbo which frustrates, bores and alienates them.

In the Catholic Church Latin was the official language of the liturgy until the Second Vatican Council. The argument for retaining it long after it was the spoken language of the early Christians was its supposed underpinning of the universality of the Church. The reality was a universality of ignorance by the ‘out’ group of ordinary Catholics who failed to appreciate much of what was going on within, and intended by, the sacred liturgies. Some felt it enhanced the sense of mystery surrounding the sacraments; in reality it perpetuated a lack of understanding about what was being sacramentally enacted.

The best ‘expert’ is the person who can discuss complex issues with other experts in a shared and specialised language but can equally share its meaning with non-experts in language which they can readily understand and remember. The latter may take a little longer but the result is enhanced knowledge, inclusivity and shared power.
With all this in mind the question has to be asked as to why so many Catholic theologians and other ‘experts’ insist on using the original Latin titles for papal encyclicals and Vatican documents. It creates an ‘in’ group who know, or pretend to know, Latin and an ‘out’ group who don’t know Latin and don’t even know how to pronounce the Latin words of the title and are thus very unlikely to remember them or to be drawn to reading encyclicals.

Which is more meaningful, forceful, easily remembered and understood and likely to draw Catholics to read it – ‘Amoris Laetitia’ or ‘The Joy of Love?’

I see no problem with such documents and encyclicals being first promulgated in Latin and national language groups then translating the Latin into their own native languages. However I see a big problem with continuing to use the original Latin title when preaching, speaking or writing about these encyclicals and documents, even with using the Latin title first and its English translation in brackets afterwards. If the majority of people don’t know Latin why use the Latin title at all? Is it to create an ‘in’ group who wish others to admire their learning and an alienated and frustrated ‘out’ group? Or is the Vatican just unaware of how subconsciously alienating this custom is to the majority of Catholics?

If the reader doesn’t think this is a problem, ask a few Catholic friends to name some of the encyclicals of the last two popes and the titles of a few encyclicals which they themselves have read! I surmise the answers will show a terrible waste of so much papal wisdom, divine inspiration and magisterial guidance to the laity of the Catholic Church and to the rest of humanity.

I look forward to your comments, whether you agree or disagree.