As the root source of the threat to the human ecosystem Pope Francis has targeted the ‘technocratic paradigm’ – the mindset that sees in technology alone the solution to all problems. What explains this obsession with technology, both among its creators and its consumers?

It is in articles 101-136 of Laudato Si’ that we find Pope Francis’ analysis of the root of the current threat to the earth environment. First comes the ‘technocratic paradigm’ – the growing tendency to see in technology the sole and sufficient route to the future. This fosters ‘modern anthropocentrism’ – the human tendency to think of ourselves as masters of creation rather than dependent upon it. ‘Practical relativism’ follows: our tendency to solve problems in isolation, without respect to the wider and long-term impact of the ‘fixes’ we apply. 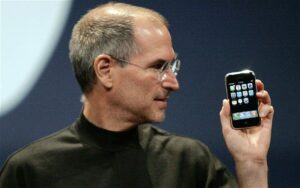 Steve Jobs – the ‘iconic’ technocrat – launching the iPhone in 2007

There can be no serious questioning of the weight of this diagnosis. Who can be unaware of the impact of technology – in all of its varieties – upon the physical context of our lives, from the morning alarm to the workplace computer and then, perhaps the evening TV or ‘home cinema’ experience. Technology’s impact upon our inner space is also unavoidable, and possibly even more profound. To judge by the coverage given by the media, we avidly look for news of tech fixes to every human ailment from paralysis to Alzheimer’s disease to blindness – and follow the progress of domestic robots in house cleaning and lawn control. Will there soon be powered ‘exoskeletons’ to boost our physical strength for heavy lifting? Will today’s armed drones be the precursors of fully automated warfare? Are powerful long-lasting batteries just around the corner, to make affordable electric cars the norm everywhere? And what is going on just now in nuclear fusion research, to realise the dream of limitless cheap and clean energy?

‘You’re a phone addict,’ my daughter-in-law told me in July 2015 – and she has a point. Information technology feeds this commentator’s hunger for news on everything from the Eurozone crisis to the war in Syria and Iraq, not to mention push-back among some Catholics to Laudato Si’. When away from base, in almost every idle moment, if there is a possibility of a wifi connection, I tend to reach for my phone’s browser to see ‘what gives’.

Yet my own experience leads me to look in particular for signs that the information deluge can also lead to wisdom – a realisation that there will never be an app that can do for us what wild places or prayer can do, or to deal with a sudden bereavement, or sudden redundancy, or even the news of our own impending mortality. The buzz that new technology brings is always temporary, a vain flight from the fragility and tragedy of life. 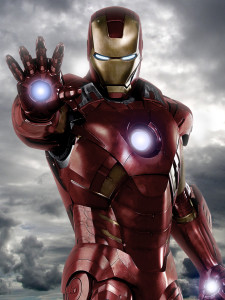 The constant truth is that, unless we do suffer some kind of grounding experience, we typically want to escape from the reality of our own limitedness and vulnerability. Disbelieving in our own value as temporary beings whose bodies will eventually be powerless to prevent their own interment or cremation, we seek to escape this reality through fantasies of invulnerability and permanence. That’s why teenage boys can spend so much time on digital games of ‘warcraft’ and why Hollywood can make billions from superhero movies. The movie title Ironman says it all: we (men especially) are typically ashamed to be mere flesh and blood – the stuff of inevitable decay.

It follows necessarily that we seek some kind of ‘add on’. The young jihadist’s Kalashnikov, the young westerner’s Smartphone and the technocrat’s executive jet are hugely different in terms of function and effect, but they all serve essentially the same private purpose: to reassure us of the value we are constantly seeking to enhance, the value we cannot believe we already possess in our naked selves.

It is this that makes us endlessly subject to the fetishisation of ‘add ons’ – accessories that give us temporary fixes to our need for reassurance. The next person’s lack of interest in what we already possess will convince us we ‘need’ whatever it is that currently fascinates him or her. Knowing this, Apple Corps and l’Oreal can always be sure that the next ‘iteration’ of their latest ‘must haves’ will be in demand 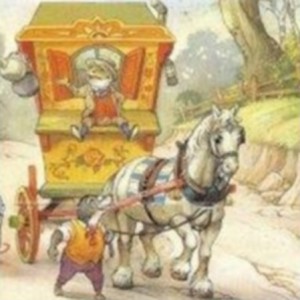 Kenneth Graham’s character, Toad, in The Wind in the Willows is a timeless archetype of this very human affliction. We meet him in a state of complete delight in his new horse-drawn caravan. This is to be his mobile home forever – or so he tells his friends Ratty and Mole. Completely convinced, these three set off to the sound of clopping hooves and the tinkling kitchen utensils that decorate the interior.

Out of the blue they are passed by a fast motor car – whose driver shows his contempt for the caravan and its occupants by failing to slow down as he passes. To their astonishment Mole and Ratty find that this single mechanical epiphany is sufficient to destroy Toad’s interest in the caravan, and to create a new and dangerous fixation. The rest of the story is an account of their failure to save Toad from the consequences.

Published in 1908, The Wind in the Willows pinpoints the human weakness that lies at the root of all technology ‘buzzes’. Steve Jobs’ success in disrupting the mobile phone market with the iPhone became the ‘iconic’ objective of all today’s entrepreneurial wannabes – and our neighbour who flashes its latest iteration will seal the doom of its predecessor. This single failing is sufficient to explain both technocracy and the endless demand for its products.

This is the root spiritual problem of human desire. First, our self-satisfaction is always unstable. Second, the merest suggestion that we will be better off with the latest ‘iconic’ accessory can trigger self-dissatisfaction and the supposition that we ‘really’ need it. A yearning for possession can then seize hold. 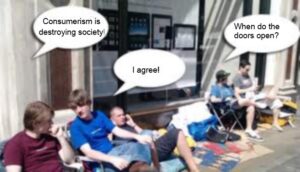 Notice that ‘consumerism’ is almost as inadequate a term for this problem as ‘materialism’. (Thankfully the latter does not appear even once in Laudato Si’.) All words ending in ‘ism’ imply an intellectual bias – but whose ‘consumption’ is caused by such a bias? Who sets out to be a ‘consumerist’? Mr Toad wanted to believe that his caravan was the be-all and end-all of his desire. He had no initial intent to swap it for a fast car. So it is with whatever we are currently fascinated by. It is in a combination of the instability of our self-esteem with an experience of something (apparently) better that our every next technology fetish will originate. The term ‘consumerism’ serves the dual purpose of apparently naming a problem that’s out there – and of exonerating ourselves from complicity. Until we all acknowledge our own susceptibility to the sabotaging of our present content by an endlessly innovative market – and by the acquaintance in thrall to the next ‘must-have’ – we won’t really catch hold of the problem.

For the church to recover its grip on this we merely need to see that Eve had exactly the same problem, and that we are warned about it by the ninth and tenth commandments. The ‘technocratic paradigm’ can be overcome only by a prayerful resistance to the call to endless covetousness – mimetic desire – and a passionate insistence that what we truly need is the reassurance born of relationship with the true source of our being. That is what possessed Jesus of Nazareth, and his passion was the desire to lead all of us to the same truth.