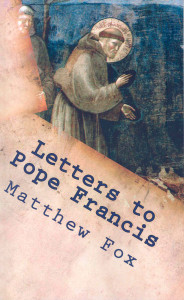 The election of Jorge Mario Bergoglio to the Papacy marked a series of historic Papal firsts—first Jesuit, first from the Americas and first from the Southern Hemisphere. But most moving was his being the first to take the name of St. Francis. At a time when the Vatican is embroiled in decades-long scandals of the Curia and its clergy around the globe, this act has inspired the world to hope for a church rebuilt in the spirit of his namesake, Francis.

Former Dominican priest Matthew Fox presents a series of heartfelt letters to his brother in Christ about the great challenges facing the church today, drawing from the deep spiritual and theological sources that have been suppressed since Vatican II, and implores him to restore the sensus fidelium (the sense of the faithful) and reshape a church with justice and compassion.

Letters to Pope Francis
Paperback: 152 pages
Publisher: CreateSpace Independent Publishing Platform  (June 24, 2013)
ISBN-10: 1490372970
ISBN-13: 978-1490372976
About the Author
Matthew Fox holds a Ph.D. in spirituality, summa cum laude, from the Institut Catholique de Paris. His long career of teaching ministry includes founding the Institute of Culture and Creation Spirituality, which was shut down after 19 years under pressure from then-Cardinal Ratzinger whose pursuit of him and other theologians led to his “silencing” in 1989 and ultimate expulsion from the Dominican Order in 1993. He started the University of Creation Spirituality and is author of 31 books on spirituality and culture including Original Blessing, The Coming of the Cosmic Christ, A Spirituality Named Compassion and Hildegard of Bingen: A Saint for Our Times.  He has been active as a priest in the Anglican community since being expelled from the Dominicans.