Caller to RTÉ’s Liveline told by Dublin Archdiocese that having two Godmothers is “breaking the law.” [14th June]

A caller to RTÉ’s Liveline radio show on Thursday 13th June, told of how a representative of Dublin Archdiocese will not allow her daughter to have two Godmothers at her upcoming baptism. The upset caller told Joe Duffy of how a staff member at Archbishop’s House said that having two Godmothers was against “the law” and that if she proceeded “the law” would be broken and she would be “to blame.” When the caller asked for further explanation on this statement, it was not given. Angered by this, the caller told how she has decided not to be part of the Catholic Church any longer, and is now planning a Humanist Naming Ceremony for her four month old baby daughter. 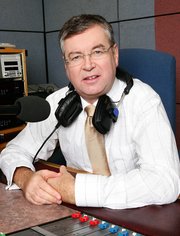 Following this caller, the phone lines jumped with other callers who had had two Godparents of the same sex, without any questions or threats of “breaking the law” in parishes of Dublin Archdiocese and other surrounding Diocese. Listen to the Liveline calls here.

Pope Francis, in a recent homily (May 25th last), spoke of how “those who approach the Church should find the doors open and not find people who want to control the faith.” Pope Francis goes on to illustrate this by telling a poignant story, true of many parts of this world, of a young single mother seeking a Baptism for her child:

“Think about the single mother who goes to the church in the parish and says to the secretary ‘I want my child baptized’. And then this Christian says: ‘No, you cannot because you’re not married!’. But look, this girl who had the courage to carry her pregnancy and not to return her son to the sender, what does she get? A closed door! This is not zeal! It is far from the Lord! It does not open doors! And so when we go down this road, when we have this attitude, we do not do good to people – the People of God!”

As Christians we all have the responsibility to open the doors to our faith for those who come knocking, whatever their circumstance. Click to read Pope Francis’ homily on the Open Door of our Faith.