‘A Lost Tribe’: a story that should not have ended this way 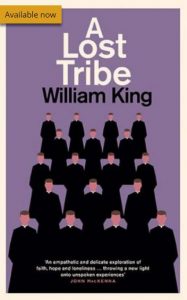 I had the most eerie feeling on first scanning the back-cover blurb of this novel.* Not only would the story’s narrative arc begin in Dublin in 1962 (with seminarians hopefully watching the opening of Vatican II in Rome on a just-arrived TV set): the author is now parish priest of Rathmines, Dublin.

My frisson had to do with the fact that not only was I confirmed (c.1954) in Fr King’s own parish Church of Mary Immaculate, Refuge of Sinners (by none other than the ‘High Command’ of the novel, Archbishop John Charles McQuaid) but that I might have mingled at UCD with some of the seminarians who inspired his fictional protagonists during those years of the Council.

Very much influenced by the Council, and by some of the clerical personalities who taught in, or visited, Earlsfort Terrace at that time, I was immediately agog to discover how the novel would treat of such encounters and then explore the intervening decades.  By what fervent early reformist convictions would his protagonists be gripped, and what would happen to them?  Something obviously had ‘gone wrong’ for that generation of budding Dublin priests – for the story to end in the ignominy of 2009 – but what exactly had that ‘something’ been?  What passionate arguments and dramatic defeats had transpired after 1965 – to compare, perhaps, with the bitter Parnell dispute in Joyce’s ‘Portrait of an Artist‘?  What would the novel have to say of clerical interchange with lay people, during and after the council – to test the boundaries of what was possible en route to implementing the baptismal principle of the equal dignity of all within the church, and the theological truth of the Holy Spirit who blows where God wills?

To ‘cut to the chase’, this novel hints that Vatican II was already doomed in Dublin by the time that generation of clerical students had been ordained.  None of the clerical characters of this novel develops a passionate vision of the potential of the ‘merely-baptised’ – enlivened by the Holy Spirit – to change not only the church but the secular culture of the time.  (One Charles J. Haughey was also an up-and-comer then, and sometimes visible in the environs of Kildare Street, St Stephen’s Green and Earlsfort Terrace.)  One character dismisses the thought of ever ministering to the inhabitants of a Dublin tenement, and there is not a single counterpointing reference to Catholic social teaching by any character at any stage in the story’s arc. Not even in those council years did one of these fictional  students make contact with a lay person of theological bent – and not once afterwards is there an episode of clergy-lay interchange or experiment on what might have transpired for Vatican II by way of hope.

The absence of any slight reference to Lumen Gentium 37 is also deeply poignant.  That article of that Vatican II document predicted for my generation the creation of church structures through which lay people would make their pastoral needs known to their pastors.  It was the complete absence of any such structures that doomed the Dublin archdiocese – and all of the country – to the total disgrace of the Murphy Report over four decades later.

Instead this story is about just three clerical types:  the sharp-eyed and sometimes toadying careerist bent on high academia or Rome; the diffident also-ran, too unsure of himself to rise above the role of dogsbody-to-the-bishop; the refugee-in-waiting for whom ‘change’ meant essentially a hoped-for and never-arriving end to mandatory priestly celibacy.  None of these was ever likely to challenge the High Command’s 1965 dismissal of the relevance of Vatican II for Ireland.

So, although careerism and Rome often get the blame for ‘what happened’ in Ireland after 1965, this novel strongly suggests another possible contributor:  that this 1960s generation of Dublin seminarians – despite what was also happening in Dublin and UCD at that time –  simply never caught – with any life-changing passion – what Vatican II envisioned for the transformation of the role of the ‘merely-baptised’ within the church.

Never in this novel does any of the characters encounter a lay person of the vision and Christian commitment of  the RTE personality Seán McRéamoinn – or even a clerical visionary of the calibre of a Joe Dunn, an Austin Flannery or a Fergal O’Connor.  All four of these men were meeting (re the Council) with some UCD students at that time, where the documentary producer Joe was also chaplain and Fergal a lecturer in philosophy and politics.  Austin, also Dublin-based, was a translator of the Council documents into English and a convenor of ‘Flannery’s Harriers’ – a discussion forum that included, for example, David Thornley, the TCD academic and Kevin O’Kelly of RTE.  None of King’s characters – some of whom travel to UCD in pursuit of degrees in Arts or Philosophy –  falls in with anyone who reminds this 1962-66 UCD alumnus of any of these men or of the deeply committed philosophy student Denys Turner, whom I also knew.  (Denys later became a leading academic in the UK.)

All of the most serious interchanges in this novel are therefore confined to proto- or actual clerics (with the exception of personal interchanges between the central ‘dogsbody’, Galvin, and his female romantic confidantes).  The overall pattern impressed upon the reader is of a hermetically closed clerical world that no one on the inside could or would seriously attempt to open to the wider Irish world, to let the merely-baptised in.   Moreover, neither Galvin nor any other character ever reveals any abiding theological questioning or conviction of his own in the seminary, or any moment of theological or spiritual epiphany thereafter.

The novel is therefore a tale that could have only one possible ending.  The careerists toe the Humanae Vitae line after 1968, themselves helping to end all prospect of ‘change from the top’.  The academics do the same in hope of a diocese – or else languish in seminaries and colleges.  The dogsbodies keep their noses to a pre-shaped grindstone and then go to seed or to dementia in rural parishes – or succumb to (or get the blame for) clerical child abuse (or the ‘cover up’).  The refugees take flight, sooner more often than later, and disappear without trace.  That fictional seminary of “St Paul’s” left no one in this novel with a fire-in-the belly that was sufficient to the challenge of staying put and fighting seriously for Vatican II.  That would certainly have been a losing fight, but no theological passion ever even surfaces in this story to precipitate a confrontation over Vatican II: we are always dismally distant from any prospect of an Irish Pentecost.

Perhaps, of course, William King has written – or has still to write – another novel, about a true Vatican II ‘rebel’ of that era – someone for whom a seed of Christian commitment and passion survived the deadening influence of the ‘clerical club’?  I was impressed enough by this novel to want to find that out.  This one was instead for me at different times amusing, moving, bitterly disappointing and deeply tragic in roughly equal parts.  I learned from it that I need to be more sympathetic (and prayerful) for what remains of that 60s ‘club – but I am left feeling that I was deeply naive in leaving Dublin in 1966 with the firm conviction that radical change would come inevitably in my own lifetime.   If this particular novel is historically representative and reliable, that Catholic clerical club in Dublin in 1962-65 was doomed from the start to remain an unhappy simulacrum of the ‘rat race’ it might instead have been ready to change for the better – until that shut-out external world ran out of any interest in maintaining it.  A true Christian communion of all of the baptised was never on any fervent clerical agenda in 1960s “St Paul’s”.