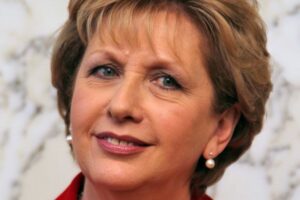 Accused of ‘shoddy scholarly treatment’ of Pope John Paul II in a discussion of the role of women in the Catholic Church on Nov 2nd, former President of Ireland Mary McAleese has denied that charge in a letter to the Irish Times of Nov 8th, 2019 – insisting that she had explicitly stated at the Nov 2nd event in Trinity college that she ‘was not talking about the sex act at all‘.

On November 7th, in a letter to the same newspaper, Dr Thomas Finegan had said that the passage quoted by Mrs McAleese from the book ‘Love and Responsibility’ did not summarise the late pope’s teaching on sex within marriage. The latter had clearly been stated in a later passage in the same book that criticised any male indifference to a woman’s feelings.

In her letter of Nov 8th Mrs Aleese writes:

“It is very clear Dr Finegan did not check the context in which I used the passage. It was explicitly stated by me that I was not talking about the sex act at all but by analogy using the passage to describe the position and role of women in the church generally, with men seen as dominant initiators and women as passive receivers. A simple and factually correct statement.”

The podcast of the Trinity College event of Nov 2nd seems to convey the relevant verbal sequence as follows below.

[Following a description by Sister Joan Chittister of the role of women in the Catholic Church as ‘invisible’, Ursula Halligan, chairing the discussion, asks:]

UH: Mary – how would you describe the role of women in the church?

If you’ll just bear with me, could I just read a little section from the writings of Pope John the Second. This is a recent pope so we’re not talking about the Dark Ages, so we’re talking about a recent pope, from his book ‘Love and Responsibility’. This is his description of marriage, of sex and marriage, a short thing …

[MMcA reads] “It is the very nature of the act that the man plays the active role and takes the initiative while the woman is a comparatively passive partner whose function it is to accept and experience. For the purpose of the sexual act it is enough for her to be passive and unresisting, so much so that it can even take place without her volition while she is in a state in which she has no awareness at all of what is happening – for instance when she is asleep or unconscious.”

[MMcA continues] That is how we are treated in the church – expected to be asleep, unconscious while men get on with what they have to do. And here’s the sequel to that: when Fr Sean Fagan called Pope John Paul out on that and said the obvious. He asked a question. He said: ‘can this really be church teaching?’ He said ‘it sounds like rape’.

UH: (Indistinct) That is, that is shocking… Can we move from that to ideally what should the church look like?

JC: Well in the first place there has to be some coherence in the theology …