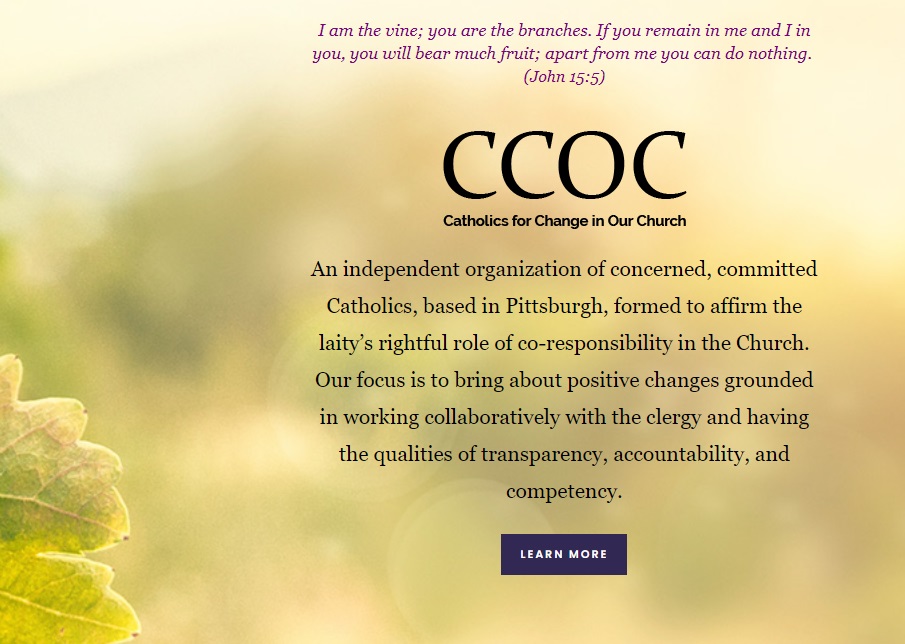 Pittsburgh CCOC mirrors ACI’s mission.  Click the image to go to the site.

Two years after a 2018 Pennsylvania (USA) grand jury report uncovered widespread clerical sexual abuse in six dioceses in the state, the Pittsburgh Diocese is reeling from declining attendance and a massive restructuring program. A lay advocacy group now says the diocesan leadership has largely failed to repair broken trust – according to an NCR report of August 7th, 2020.

“I don’t think they’ve made progress since the grand jury,” says Jan Hayes, a leader of Catholics for Change in Our Church, Pittsburgh.

“All too often, the church hierarchy and the clergy in the parishes are again trying to tweak the model that isn’t working — making this small change here, that small change there,” Kevin Hayes said. “Some of the changes really do need to be structural, and not window dressing.”

An even more rapid decline in church attendance set in following the 2018 report – as devastating for Pittsburgh Catholics as the 2009 Ryan and Murphy reports in Ireland.

Hayes said he still feels the diocese has not taken full responsibility for its role in the crisis.

“There still has not been a true mea culpa — an apology — from the diocese — for not only the abuse that occurred, but the role the diocese played in not revealing the truth about the extent of the abuse. … Only when that accountability occurs can there be movement towards true reconciliation.”