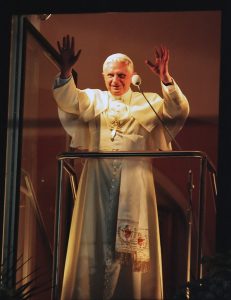 The US National Catholic Reporter describes this as ‘a shocking move that comes as Pope Francis is considering the possibility of allowing older, married men to be ordained as priests in the Amazon region.’

According to reported excerpts from the forthcoming book, the  retired pope says he cannot remain silent in the wake of a decision made by a meeting of Brazilian bishops in Rome in October 2019 – to request that, where necessary to provide priests for remote communities in Amazonia, bishops of that region be given discretion to ordain married men.

The book is reportedly co-written with Cardinal Robert Sarah, and to be released in France Jan. 15, and entitled “From the Depths of Our Hearts“.

While some theologians are expressing dismay at what they see as a breach by the retired pope of the protocols governing the role of a ‘pope emeritus’, an article by CRUX argues that “Benedict is defending celibacy from the media not from Francis”.  Charles Collins insists that the retired Pope Benedict is merely agreeing with Pope Francis’s  ‘own stated position that “optional celibacy” for the priesthood is not on the table’.

On January 14th, 2020 it was reported by NCR that Pope Benedict XVI had directed that his name be removed as co-author of the projected book.